This is widely regarded as the most important of the three first works on fishes published almost simultaneously in the 16th century. It covers more species than the works of Belon (1553) and Salviani (1554-1557). As indicated by the Latin title, this work deals with real marine fish: the descriptions and illustrations are not fantasies. This mostly true, but the work does also contain some mythological sea creatures. All are represented in nice, detailed woodcuts. Apart from fishes, over a hundred molluscs and several other invertebrates, notably echinoderms and crustaceans are illustrated. A few shells are clearly from other locations, notably the West and East Indies. In the rear there is a section on freshwater fishes and invertebrates, as well as some terrestrial species, mainly amphibians and reptiles. "In his own day Rondelet was almost as well-known as an anatomist as a zoologist. A popular lecturer, Rondelet attracted scholars from all over Europe: ... Gesner and Aldrovandi also studied briefly under him ... For those fish he could inspect on the coast of Languedoc, Rondelet is thorough and usually accurate" (DSB). This work actually consists of two books; the second, which appeared a year later, is titled Universae aquatilium historiae pars altera cum veris ipsorum imaginibus. The second book includes a long poem and - again - Rondelet's portrait. Usually, these two books are found bound together, as in this copy. Here they are bound in reverse order. A replacement woodcut of a fish is mounted on page 238 of the first book (as usual). A fine, complete copy with strong impressions, in an attractive 17th century binding. The spine label is from a later date. Light damp-staining to the lower margin of the last few leaves, stronger on the rear free endpaper; a few, shallow, traces of worming in the inner boards; otherwise, surprisingly clean inside; no foxing and hardly any browning. Skilful repair to the clasps. Excellent for a book that is well over 450 years old. Caprotti I, pp. 18-19; Dean III, p. 309; DSB XI, pp. 527-528; Nissen Schöne Fischbücher, 105; Nissen ZBI, 3475. 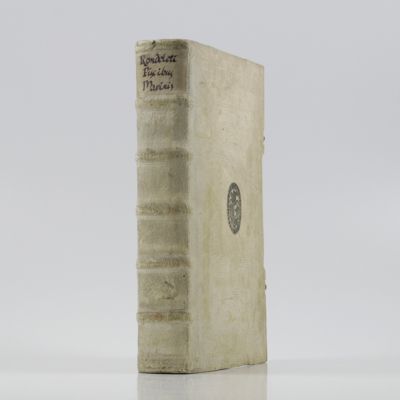