Photos by the French polar explorer and photographer, Robert Pommier (1919-1961), and initiator of the Paul-Émile Victor Expedition, a scientific expedition to Terre Adélie (French Antarctica). The photos include two by Paul-Émile Victor of the research vessel Commandant Charcot, moored in a French harbour (Rouen); eight of crew members, and two of Antarctic land and seascapes (both by Pommier). It includes one of four crew members shortly before departure, and several photos of André-Frank Liotard (1905-1982), leader of the expedition, including two (an original print, and an enlarged one) of Liotard meeting a chinstrap penguin ( Pygoscelis antarctica). In November 1948, the ' Commandant Charcot set sail for Terre Adélie, arriving in February 1949. Because the pack ice had already formed, attempts to dock ended in failure. One crew member, the cinematographer J. A. Martin, died while at the expedition was still at sea and was buried in Cape Town. A new departure in September 1949 resulted in a successful landing on January 20, 1950. A team of eleven men, under the direction of André-Frank Liotard installed a new Antarctic observation and research base, named Port-Martin. Before leaving, Liotard was appointed head of government of Terre Adélie. As such, he opened the southernmost French post office. On his return in March 1951, after a year in which all the objectives were achieved (installation of a base, scientific work, geographical exploration), Liotard was put in charge of public relations for the French Polar Expeditions. An illustrated four pp. brochure is added - made under the direction of Liotard and signed by him on the front cover - announcing a documentary and presentation by crew members regarding the expedition, and its 12 participants. This brochure is also signed by Paul-Émile Victor. Paul-Émile Victor (born Paul Eugène Steinschneider; 1907-1995) “…was a French ethnologist and explorer. In 1934, he participated in an expedition traversing Greenland. During World War II, he enlisted with the US Air Force. After the war, he initiated the Expéditions polaires françaises. He died in 1995 on Bora Bora, to which he had retired in 1977. In 1952 he was awarded the Patron's Gold Medal by the Royal Geographical Society of London. Mount Victor, in the Belgica Mountains of Antarctica, is named for him" (Wikipedia). Photos stamped on verso "Expéditions polaires françaises" with address in Paris, "Cliché R. Pommier" or "Photo Paul-Émile Victor" (and a few without stamp), several photos inscribed (some dated) in the lower end by "Frank" (i.e. Liotard), otherwise clean, without creasing; Brochure with light staining and toning of the wrappers, otherwise a very good - and unique - copy. Not in Conrad, Bibliography of Antarctic Exploration 1768-1960 (focussing too much on Anglo-Saxon endeavours). 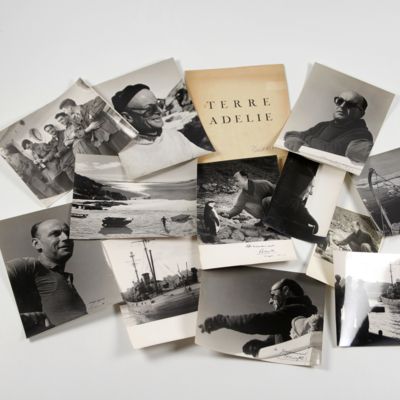