Illustrations of the botany of Captain Cook's voyage round the world in H.M.S. Endeavour in 1768-71. Australian plants.

London, the Trustees of the British Museum, 1900-1905. Three parts in three. Folio (47.5 x 31.5 cm). Title and 102 pp.,; 320 lithographed plates (numbered 1-318, 41A, and 45A) and three folding maps. The plates are photolithographic reproductions of original engraved proof plates by F. P. Nodder, James Miller, J. F. Miller, and John Cleveley that were never published. The set is bound in uniform black buckram with gilt lettering on spine, reading: Cook's First voyage. Australian plants, and the plate numbers contained in each volume.

One of only 300 sets produced, being the first published edition of nearly all the botanical illustrations by Banks and Solander on Australian plants. This set is the first substantial selection made from copper plates engraved under Joseph Banks' direction between 1772 and 1784. The botanical specimens collected during Cook's voyage were carefully depicted in watercolour by several artists, both during and after return of the expedition, under supervision of Banks and Solander. Between 1771-1784 18 selected engravers made at least 743 engraved copperplates of superb quality from the completed watercolour drawings. However, for various reasons Banks never got to publishing these plates and after his death they were bequeathed to the British Museum. It took until 1901 before the museum published a first selection of these plates, though a few of them had been used to illustrate other books. The present publication, with identifications by J. Britten, represents the first appearance of most of the images and is a magnificent overview of the first botanical study of Australian plants. Published in three parts (in 1900, 1901, and 1905), each part consisted of text and plates, though the page numbers of the text followed up on each other. In this copy, all text has been bound together at the start of the first volume, preceded by one general title page dated 1905 (this is the title page of part III). The title pages for parts I and II were left out, as per the instructions of the binder: after completion of the publication, the set was meant to be bound like this and the titles of parts I and II were only meant for temporary use. Bindings very firm with only some light shelf wear, contents mostly very clean, which is unusual. Nearly all plates without foxing or spotting, only about 3 plates with some light scattered spotting. A very good+ set. Nissen BBI, 74; Mitchell Library, 934; Stafleu and Cowan, 295. 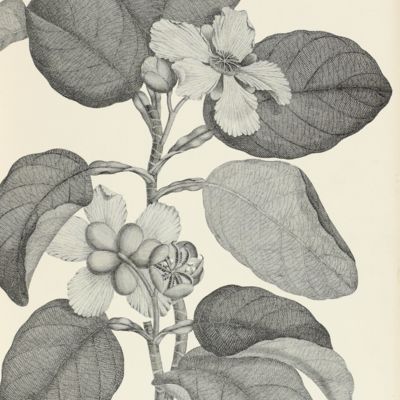 Illustrations of the botany of Captain Cook's voyage round the world in H.M.S. Endeavour in 1768-71. Australian plants.