The second most important contribution to North American herpetology

A very rare work with fine hand-coloured plates written by the German explorer and herpetologist Prince Alexander Philipp Maximilian zu Wied-Neuwied (1782-1867), discussing reptiles and amphibians from North America, with an emphasis on turtles, but also on salamanders, and on snakes and other reptiles. It includes several new species. "In 1832, his Brazilian adventure completed, Wied embarked on his second exploration, a journey to the United States to compare the Indians and natural history of North America to those of South America...His accounts of the trip are second in importance only to those of the American explorers Meriwether Lewis and William Clark as a record of the trans-Mississippian region. Wied's report ('Reise in das innere Nord-America,')... was justly renowned and [Carl] Bodmer's watercolors are only today being recognized for their great historical and artistic value...Wied described a number of America's commonest amphibians and reptiles...His major report on the reptiles [this work], illustrated with seven beautifully handcolored plates of turtles and salamanders by Bodmer, was published shortly before the prince's death" (Adler). In the 1980's its rarity led to the publication of a limited-edition reprint edition by Bibliomania, also with hand-colouring. Some foxing to the text, the plates much cleaner. In all a very good copy. Adler I, pp. 22-23; Cat. BM(NH) p. 2316; Nissen ZBI, 4400. 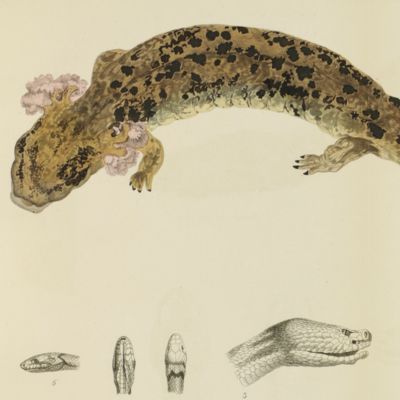