An important and rare contribution to the flora of the Pyrenees

An important contribution to the flora of southern France and the Pyrenees mountains, written by the British botanist George Bentham (1800-1884), who spent much time in France. The present work is based on collections and observations made during a three-month tour through Figueras (Spain) and Bordeaux, Narbonne and Montpellier, travelled in the company of several botanists and naturalists, notably the Scottish botanist George Arnott Walker (1799-1868), and the French palaeontologist and malacologist Esprit Requien (1788-1851). Provenance: inscribed in the front wrapper top margin and verso, Théodore Parès. This is most probably the French lawyer and politician (1796-1880), who was advocate-general in Montpellier and a congressman in the French national parliament for the department Pyrénées-Orientales between 1837 and 1848. Tipped in: a handwritten letter by the author, then residing at Hotel Brighton, dated Sat Nov. 8, in which he and his wife accept an invitation to meet a Mr and Mrs Gay. This may be the French botanist Claude Gay (1800-1873). The Hotel Brighton, built by Lord Egerton at the beginning of the 19th century, was one of the first hotels in Paris. The year is not given, and could be any of the following, in descending likelihood; 1828, 1834, 1845, 1851, 1856, 1862, or 1873. Spot on front wrapper and front free endpaper; a few marginalia (mainly ticks in the Catalogue) in pencil or ink; otherwise a very good, clean copy in an attractive binding. Stafleu and Cowan, 420. 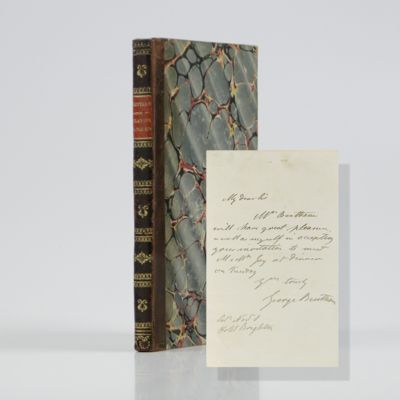