One of a series of 125 numbered copies, this being number LXXXIV. This beautifully illustrated work contains a review of 27 costume designs made and selected by the renowed French-Ukrainian Art Deco artist, Sonia Ilinitchna Delaunay, née Stern (1885-1979) [some sources say Sarah Elievna Shtern]. Together with her husband, the artist Robert Delaunay, she developed "Orphism or Orphic Cubism, a term coined by the French poet Guillaume Apollinaire in 1912, [it] was an offshoot of Cubism that focused on pure abstraction and bright colors, influenced by Fauvism, the theoretical writings of Paul Signac, Charles Henry and the dye chemist Eugène Chevreul. This movement, perceived as key in the transition from Cubism to Abstract art, was pioneered by František Kupka, Robert Delaunay and Sonia Delaunay, who relaunched the use of color during the monochromatic phase of Cubism. The meaning of the term Orphism was elusive when it first appeared and remains to some extent vague (WikiArt). Sonia Delauney is the most celebrated artist of the orphism movement. Her work has been sold at auction at prices up to € 4 million (artsy net site). The text of this work is by Apollinaire and the preface is by Jacques Damase. Jacques Damase (1930-2014) was a French publisher, poet and gallery owner. Damase established his publishing house at in 1948, at the age of 17, making him (according to French Wikipedia) 'the youngest publisher in the world' of magazines. As an author, he published monographs on Chagall, Braque, Vivin, Picasso, and others. Signed, on the last page, by Sonia Delauney and Damase. Copy from the influentual Swiss designer and art Josef Müller-Brockmann (1914-1996), signed by him in pencil, as 'Sepp'. Brockmann was a graphic designer who - like Sonia Delaunay - had a zest for bold, primary colours. "Joseph Müller-Brockmann was influenced by the ideas of several different design and art movements including Constructivism, De Stijl, Suprematism and the Bauhaus. He is perhaps the most well-known Swiss designer" (Purcell). A wonderfully preserved copy. In mint condition. Purcell, K. W. (Biography Josef Müller Brockmann) in: Eye Magazine. 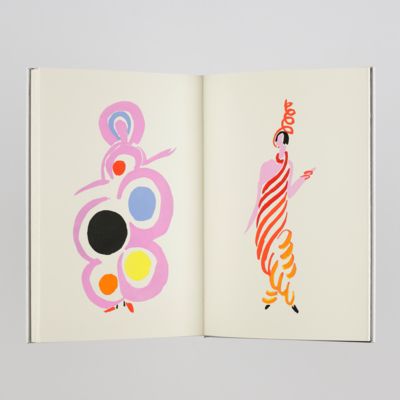