An extremely rare, contemporary hand-coloured copy of a work that is quite rare in itself. The colouring often subtile - never fancy. Written by the German early zoologist Conrad Gesner, or Gessner (1516-1566), "One of the great scholars of the Renaissance" (Adler). "Born into a poor family in Zürich, Switzerland, his father and teachers quickly realised his talents and supported him through university, where he studied classical languages, theology and medicine. He became Zürich's city physician, but was able to spend much of his time on collecting, research and writing. Gessner compiled monumental works on bibliography ( Bibliotheca universalis 1545-1549) and zoology ( Historia animalium 1551-1558) and was working on a major botanical text at the time of his death from plague at the age of 49. He is regarded as the father of modern scientific bibliography, zoology and botany. He was frequently the first to describe species of plants or animals in Europe, such as the tulip in 1559. A number of plants and animals have been named after him" (Wikipedia). Gessner's great zoological work, Historia animalium is a 4500-page encyclopaedia of animals, considered to be the first modern zoological work. It combines ancient sources (e.g., Aristotle, Pliny) and modern science, the latter mostly based on his own observations. "Even though he sought to distinguish observed facts from myths and popular errors and was known for his accurate depiction of many animals in Historia animalium, he also included many fictional animals such as the Unicorn and the Basilisk, which he had only heard about from medieval bestiaries. But when Gessner doubted the accuracy of the opinions he relayed in his own writings, or the validity of the illustrations he included, he clearly said so" (Wikipedia). This is his first contribution to ornithology. A German edition was published two years later. Some very light, marginal thumbing; a few small spots; a few paper-repairs to the inner top margin of the title page, and to the last index leaf; otherwise very good - if not excellent, given its age. Adler I, pp. 7-8; Cat. BM(NH) p. 668; Nissen IVB, 352 (Gessner). Neither in Anker nor in Sitwell, nor in Zimmer, underscoring its rarity. 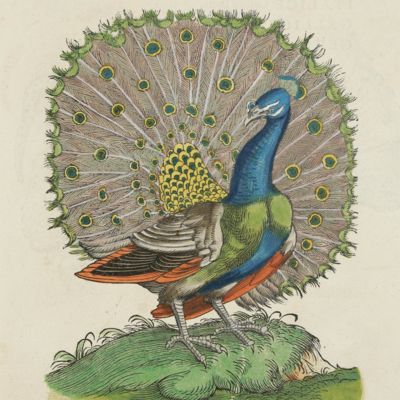