True first edition of one of Darwin's fundamental researches

On the Movements and Habits of Climbing Plants.

A rarely seen contribution to botany by Charles Darwin. Darwin, in a letter to his friend, John D. Hooker, wrote "It is strange, but I really think no one has explained simple twining plants". According to his son, Francis, "He continued his observations on climbing plants during the prolonged illness from which he suffered in the autumn of 1863, and in the following spring" (see Darwin's Autobiography, pp. 333-335). Published in Volume IX, combined nos. 33-34 of the Society's Journal( Botany section). Under No. 1733, Freeman noted: "Volume dated 1867. = No. 833". This copy with in the top margin of the front wrapper "Rec.d June 26./65". Freeman's 833 is the same, being the first of three different editions, published in quick succession. The second (Freeman 834) is Darwin's paper alone, offered commercially (i.e., omitting a few smaller papers on pp. 118-128 of the Journal issue); the third (Freeman 835) is Darwin's offprint. The latter two were reset. Only ten years later, a bound edition of this work was published by John Murray, Darwin's official publisher. Tipped in is a printed label "Presented to the Oxfordshire Natural History Society by [handwritten: The President Mr. G. CV. Druce M. A.] 189 [handwritten: 6]". Uncut. Wrappers a trifle soiled and worn at corners. In all other respects near mint. Very rare. Darwin, F. (ed.) The Autobiography of Charles Darwin and Selected Letters (1892); Freeman, 833; 1733. 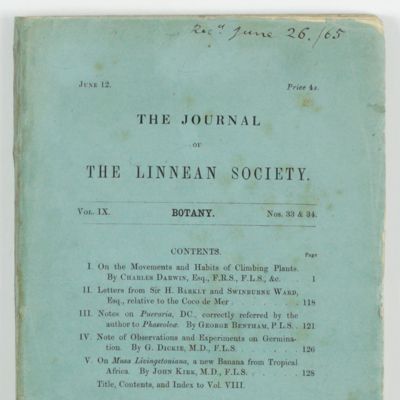 On the Movements and Habits of Climbing Plants.