Various places and publishers, 1923-1953. 4to and 8vo. Over 60 items of various size and shape. Many thousands of pages, numerous illustrations including some original photos. Preserved in two similar cardboard folders with punch holes.

Personal files of the British-born American botanist and entomologist Harold Edmund Box (1898-1973). Box specialized in crop-damaging insects, in particular those occurring on and in sugar cane. OCLC reports 35 works in 58 publications in two languages (English and Spanish – in which he was fluent) and 135 library holdings, published between 1927 and 1954. However, in this collection there are several papers that remained unpublished or were not intended for publication, as well as some correspondence, in particular from the American entomologist of Dutch descent, Reyer Herman Van Zwaluwenburg (1891-1970), Associate Entomologist of the Experiment Station of the Hawaiian Sugar Planters Association. The Smithsonian Institution (United States National Museum) holds a collection comprising a field book, correspondence, and identification lists from Box's collecting efforts in Antigua and Barbuda from 1937-1939. In comparison, the present collection is much broader. Box had the gift of combining extensive factual information with a pleasant writing style, which left room for personal observations and more trivial – but nevertheless interesting – data. It includes, for instance, the following: a typescript of 11 pp., titled Report upon a visit to Hacienda la Estrella, Aguadulce, Republic of Panamá, Central America to investigate the sugar-cane moth borer,Diatraea and to recommend practical control measures, with a partially hand-coloured map; a typescript titled Informe sobre las plagas insectiles que atacan a la caña de azucar en Mexico, a base de un viaje de reconocimiento effectuado durante mayo-julio 1952, a las regiones caneras: I - Sinaloa, VI - Balsas, VII - Tehuacan, VIII-B-Papaloapan, XII-Veracruz Central, XIII-Costa de Veracruz y XIV-Huasteca, with seven original photographs, tipped-in and captioned; a similar typescript, with pencil and ink annotations, titled Records of sugar-cane Insects in Formosa (Taiwan), apparently not listed by Takano and Yanagihara, 1939 (3 pp.); a very large typescript (over 130 pp.) with pencil and ink annotations, as well as paste-overs, titled List of the recorded sugar-cane insects of the world and their principal natural enemies; and 47 offprints, several from little-known periodicals and publishers, but also from leading entomological and botanical journals. The final work is a transcript of his lecture at the Ninth International Congress of Entomology in Amsterdam, August 1951, titled The history and changing status of some Neotropical Insect Pests of Sugar Cane, being a 19 pp. typescript, written by Box in Maracay, Venezuela on 30 July 1951, and as Box stated "The title has been altered, but the text follows closely the abstract". Nevertheless, Box added several corrections. Most published papers are offprints, several are signed by Box. A few with some minor, mostly marginal damage due to punching; and some fraying of the edges of larger leaves; a few papers rather age-toned, or with some foxing; otherwise in very good condition. 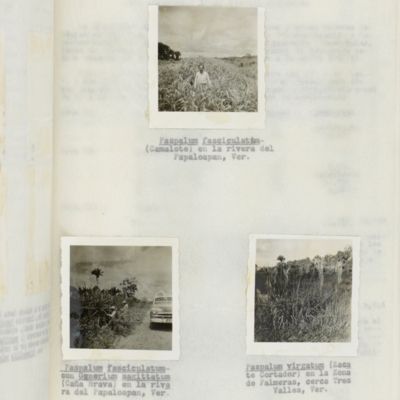