The best works of Fabre in the finest bindings

Published 1920-1924
Item ID 67492
Sorry, this item is currently not for sale. Please contact us for more information.

The definitive Jean Henri Fabre (1823-1915) and his major work, in fine bindings. "Fabre was a popular teacher, physicist, chemist and botanist. However, he is probably best known for his findings in the field of entomology, the study of insects, and is considered by many to be the father of modern entomology. Much of his enduring popularity is due to his marvelous teaching ability and his manner of writing about the lives of insects in biographical form, which he preferred to a clinically detached, journalistic mode of recording. In doing so he combined what he called 'my passion for scientific truth with keen observations and an engaging, colloquial style of writing'... His Souvenirs Entomologiques is a series of texts on insects and arachnids. He influenced the later writings of Charles Darwin, who called Fabre 'an inimitable observer'. Fabre, however, was a Christian who remained sceptical about Darwin's theory of evolution, as he always held back from all theories and systems. His special force was exact and detailed observation, field research, always avoiding general conclusions from his observations, which he considered premature" (Wikipedia). Added, in a near-matching binding (only the spine bands are slightly more pronounced, and the compartments plain) La vie de J.-H. Fabre. Naturaliste. Suivie du répertoire général analytique des Souvenirs Entomologiques par le Dr. G.-V. Legros. This work, published in 1924, also by Delagrave, has a preface by Fabre himself, and his portrait. It was published by the Delagrave in the same year as the last volume of the Souvenirs, and is bound with the original pictorial wrappers included. It contains xv + 439 pp., and 16 tissue-guarded, mostly photographic plates. Uncut. Fore edges somewhat spotted, otherwise clean. A very nice ensemble in excellent condition. Not in Nissen. 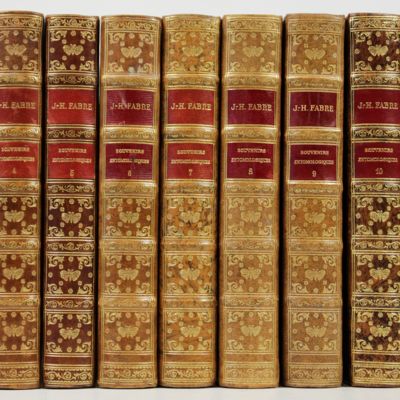