First edition of a very rare book by the French naturalist and explorer Pierre Belon (1517-1564). "...there are three great authors who truly founded modern ichthyology. It is remarkable that their books appeared at almost the same time: Belon in 1553, Rondelet in 1554 and 1555, and Salviani from 1554 to 1558. All three, contrary to the compilers who mainly quoted the old Roman authors, personally saw and examined the fishes they spoke of and saw to it that they were drawn with some exactitude... In his De Aquatilibus, Belon provided drawings of 110 species of fishes, including 22 cartilaginous species and 17 freshwater species; and he discussed some 20 other species for which he gives no drawings. Nearly all the marine fishes are Mediterranean, but there are also some species from the Paris fish market." [Cuvier (Pietsch), p. 42]. The woodcuts show fishes as well as a turtle, hippo, crocodiles, whales and dolphins, and the famous sea monk. Bookplate mounted on front pastedown; tiny stamp of former owner ‘Library of Robert(?) Rofen’ in the lower margin of the front free endpaper recto. Old owner’s signature, dated 1555, on the title page. Title page repaired at edges. This is an exceptionally wide-margined copy, which is rarely seen. A very occasional scattered spot, but in all a very clean and nice copy. Dean III, p. 216; Nissen Schöne Fischbücher, 13; Nissen ZBI, 302; Pietsch Cuvier's History of the Natural Sciences: twenty-four lessons from Antiquity to the Renaissance; Wood, p. 230. 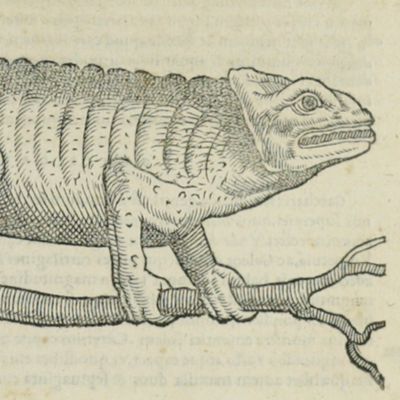