Rare start of the first Swiss scientific journal, of which only nine volumes have been published (1751-1787). It was only a few years after the foundation of the physical society in Zürich chiefly through the initiative of the famous printer Imhof that this journal came into being. Its success was immediate as most famous scientists contributed, including Daniel Bernoulli, and Johann Heinrich Lambert. It deals mainly with natural history, medicine, and physics. The publication by Johann Heinrich Lambert is his first paper, “Tentamen de vi caloris, que corpora dilatat ejusque dimensione” It deals with the expansion of fluids and bodies under heat. A logarithmic curve fitting the expansion is derived, but many questions are left unanswered. These were taken up later in Lambert's work on hygrometry and pyrometry. Daniel Bernouilli (1700-1782) is present with two works, the "Diverses reflexions sur la physique générale" (parts I and II). There are also early works on crustaceans, and botany. Endpapers a bit discoloured, otherwise a very good, clean copy. Johann Heinrich Lambert (1728-1777) Collected Works - Sämtliche Werke Online. 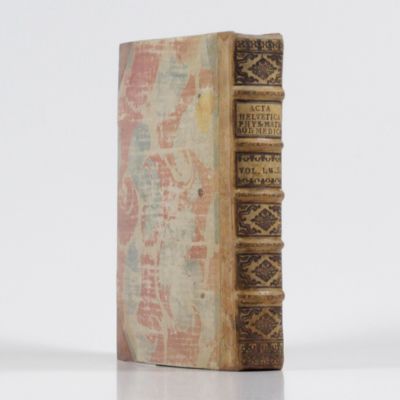