Very rare in a complete state. These are the results of one of the major Antarctic expeditions, divided into "Geographie", "Meteorologie", "Geologie", "Palaeontologie", "Botanik", but mainly zoological. The Cat. BM(NH) quotes only 21 parts. Conrad: "The scientific results of this expedition were greater than those of any other preceding expedition. There were major advances in all areas of Antarctic knowledge, aided by Larsen and the scientists hanging on to their scientific collections with extraordinary tenacity throughout their adventures. This is one of the expeditions that has made plausible Antarctic fiction so problematic: a novelist would blush to rely on so many serendipitous encounters to reunite and rescue the party". The chief results of this expedition include the discovery of varied marine life in (near) freezing waters, and the discovery of fossils indicating that Antarctica once had a much warmer climate. The work includes contributions by many eminent scientists. In the zoology and palaeontology sections the Mollusca are well-represented, for instance with Strebel's (1908) work on the marine gastropods from the Falklands, South Georgia and the Antarctic coastal regions. Lacks title pages to volume 4, the geology and palaeontology section (the original front wrappers are bound in instead). Internal corner of a few volumes bumped, otherwise a very good, complete set. Cat. BM(NH) 3, p. 1444; Conrad, Bibliography of Antarctic Exploration, pp. 98-100. Not in Nissen, ZBI. 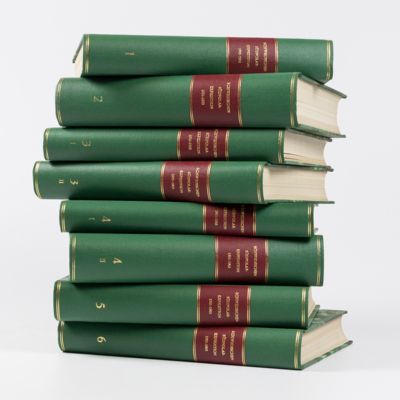