To list
« Previous Item Next Item »
A very good copy of a rare, well-illustrated monograph on parasitic crustaceans

Important monograph of parasitic cirripeds (crustaceans) of the Mediterranean Sea and adjacent parts of the Atlantic Ocean. Many haved other crustaceans, such as crabs, and hermit crabs as hosts. This work, by the British - later Tasmanian - zoologist Geoffrey Watkins Smith (1881-1916), forms the complete 29th monograph in the series Fauna und Flora des Golfes von Neapel. In contrast to most other monographies in this series, this part is entirely written in English. The second title (for the work as a separate monograph) reads - simply - Rhizocephala. Smith died on a French battlefield during WWI. Uncut. Slight wear and spotting to wrapper and explantory leaf edges, otherwise a very good, clean copy. Very rare. ADDED: an original invoice for this work, on printed paper of the publisher's, dated 6 November 1906, for the office of Duke Carl Theodor, in Munich, Germany. Nissen ZBI, 536. 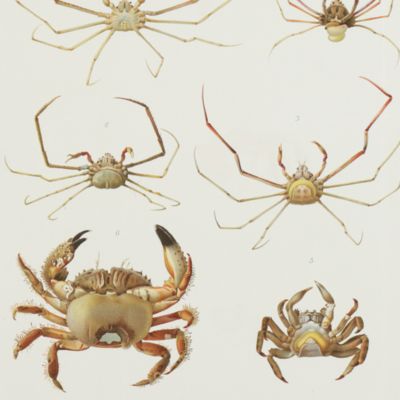