To list
« Previous Item Next Item »
Extremely rare with the original dustjacket, in near mint condition

Ivan Petrovich Pavlov (1849-1936), "Genius of conditioned reflexes" (Parry) was the first Russian scientist to receive the Nobel Prize (1904). This is the rare first German edition of the original published in 1926-1927. It deals with Pavlov's famous lectures on the conditioned reflexes in dogs, with two illustrations of principle tests on pp. 27-28. The 23 lectures were held in 1924. In his two prefaces, Pavlov added some new facts, and, in the translator's preface, some information on Pavlov's research after 1927. Extremely rare with original dustjacket. The cloth binding is therefore in pristine condition, with the spine not faded, as in most copies. Dust jacket with only some tiny marginal chips, contents clean, unmarked. A near mint copy. DSB 10, pp. 431-436; Parry, pp. 78-89. 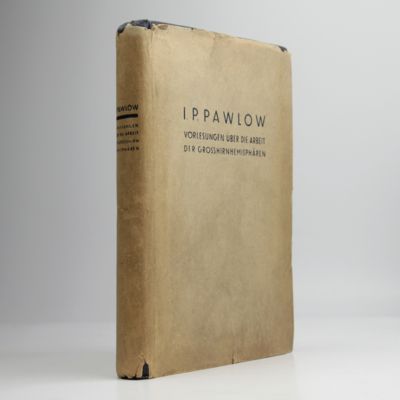