Alexandre Félix Gustave Achille Leymerie (1801-1878) was one of the leading French geologists, the first geology professor at the University of Toulouse and corresponding member of the French Academie des Sciences. Alexandre Leymerie wrote a successful Cours de Minéralogie, and Élements de Minéralogie et de Géologie (both with several reprints) and numerous contributions to the geologie and paleontology of the Alsace, Lorraine, Aube, Haute-Garonne and other departments. This is his scarce and very important geological and palaeontological contribution to the Pyrenees. "In Toulouse around 1850, a controversy on the structure of the Pyrenees opposed Frederic Petit, director of the Observatory to Alexandre Leymerie, professor of geology. The object of the debate was an assumption formulated by Petit, according to which the interior of the Pyrenees was practically empty. This hypothesis was based on work carried out by the astronomer for the determination of Toulouses latitude. Leymerie opposed this thesis vigorously. The debates that took place within the Toulouse Academy of Sciences but also in the local newspapers throw light on the organization of disciplinary spaces in the 19th century. The astronomer defended his method of research based on calculations; the geologist talked instead about the soil. The emergence of geology, a less mathematized science, created conflicts with the astronomical practices of the 19th century centering on calculation. I will try to understand how the mountain was constructed as an object of controversy, the focus of different scientific practices. Whether it was dissected by calculation or by visual observation, the mountain was a space of disciplinary fighting and epistemological questioning" Jérôme Lamy (Observatoire de Paris, abstract to the workshop The mountain as Object and Instrument of Science, Castasegna, 2007). The atlas includes the rare large folding coloured geological map which mostly lacks. The map of the region however, is lacking. The latter map was the only item for sale separately and is more common. The geological atlas contains many plates illustrating molluscs, brachiopods and echinoderms of which many apparently described here for the first time, and also four nice views. Leymerie did not live to see the text part published. It was completed and slightly edited by Éduard Privat. Uncut. Title page (publisher's name) pasted over with gilt-bordered label of Librairie Lafont in Luchon. Atlas a bit soiled, some plates a bit age-toned and some occasional light spotting, text also with some local, mostly light and marginal spotting. Rear wrapper of text part loose, spine of the atlas rebacked with blind cloth. In all a very good copy. Cat. BM(NH), p. 1107. Not in Ward and Carozzi. 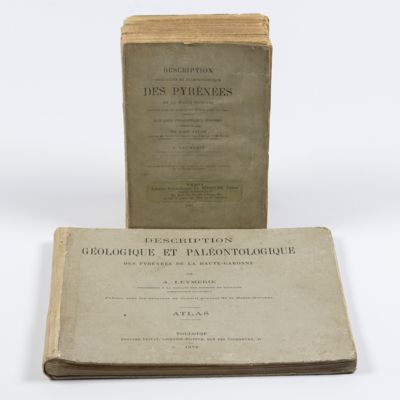