To list
« Previous Item Next Item »
Rare, very large, fine copy of this detailed work on invertebrate anatomy and morphology

An excellent collection of illustrations of the morphology, anatomy, and histology of invertebrates, such as molluscs (five plates), jellyfish, starfish, crustaceans, and insects. The plates are exceptionally large. The editor, Carl Gustav Carus (1789-1869), "...was a German physiologist and painter, born in Leipzig, who played various roles during the Romantic era. A friend of Johann Wolfgang von Goethe, he was a many-sided man: a doctor, a naturalist, a scientist, a psychologist, and a landscape painter who studied under Caspar David Friedrich. In 1811 he graduated as a doctor of medicine and a doctor of philosophy. In 1814 he was appointed professor of obstetrics and director of the maternity clinic at the teaching institution for medicine and surgery in Dresden. He wrote on art theory. From 1814 to 1817 he taught himself oil painting working under Caspar David Friedrich, the famous landscape painter. He had already taken drawing lessons from Julius Diez and subsequently studied under Julius Schnorr von Carolsfeld at the Oeser drawing academy. He is best known to scientists for originating the concept of the vertebrate archetype, a seminal idea in the development of Darwin's theory of evolution. In 1836, he was elected a foreign member of the Royal Swedish Academy of Sciences" (Wikipedia). The work was never expanded beyond the 23 plates and descriptive text present here. This, however, covers all the invertebrate groups, as intended. Provenance: the medical doctor, Karl Theodor, Duke in Bavaria (1839-1909), who founded the Augenklinik Herzog Carl Theodor (the Duke Charles Theodore Eye Clinic) in Munich in 1895. A fine and very clean copy. Rare in such condition. Nissen ZBI, 831. 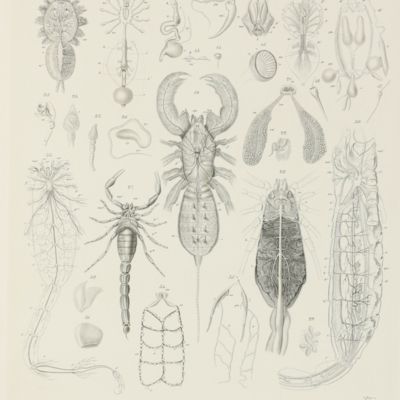