To list
« Previous Item Next Item »
Rare first, Spanish, publication of the fossil shells of Chile

Rare first, Spanish publication of the Tertiary and Quaternary fossils of Chile. Nearly all plates show molluscs, of which many are described and illustrated here for the first time. Also included are several echinoderms (sea urchins) and shark teeth. Rudolph Amadeus "Rudolfo Amando" Philippi (1808-1904) was a prominent German malacologist and ornithologist who immigrated to Chile and continued his zoological researched there. He is the author of many important publications in malacology and conchology. Inscribed by the author on the first blank to Señor D. José Nicolás Hurtado. José Nicolás Hurtado de Mendoza y Jaraquemada (1836-1908) was a Chilean lawyer, diplomat and politician who held the position of charge d'affaires in Lima, Peru, at the beginning of the crisis that led to the Spanish South American War (1864-1866). Pictorial, palaeo-malacological bookplate of Jeffrey D. Stilwell mounted on the front pastedown. Some light wear to spine ends; otherwise a very good, clean copy. Copies with both text and plates clean are rare. Nissen ZBI, 3157 (for the German translation). 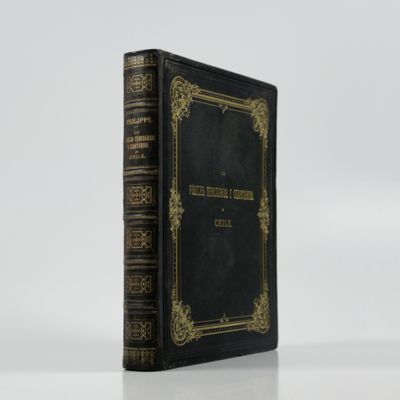