The complete bird part of the magnum opus of father and son Alfred (1836-1921) and Guillaume (1873-1957) Grandidier on the natural history, and history, of Madagascar. The whole work was published over a period of more than 80 years, and written by many specialists in diverse fields of zoology and botany, such as Vaillant (herpetology), and Mabille (butterflies), etc., sometimes in collaboration with the Grandidiers. Some parts were never completed, or announced but not published; others were reprinted, with or without re-editing. A complete collation of all the parts published, and their variants, is still wanting. This set comprises the bird section, which is complete and includes the much later published supplement. Volume numbering (and, hence, spine numbering) is somewhat confusing. A collation is as follows: Volume XII. Histoire naturelle des oiseaux. Tome I. Texte (1879). pp. [i], [1]-779; Volume XIII. Tome II. Atlas I. [(1876)-1879] 139 plates. According to Nissen, ZBI "Die ersten 40 Taf. von Faguet, Gélibert, Huet, Terrier wurden durch neue von Keulemans ersetzt" In this copy, the non-osteological plates are all by Keulemans, except 7 and 71-72 (by Huët & Faguet), 41 and 41a (Arnoult), 55 (Faguet), and 87-88 (Louveau). In atlases II and III, all the full-colour plates are by Keulemans, except, perhaps, the egg-plates, which are not signed; Volume XIV. Tome III. Atlas II (1879) 139 plates (numbering consecutive); Volume XV. Tome IV, Atlas III (1881) 122 plates (consecutive). For a total of 400 plates; Volume XII Supplément (1937) viii, 211 pp., 12 plates (full colour, by Dongé). The many full-colour plates in the bird volumes are of great beauty. According to Zimmer, publication of the atlas started in 1876, although the title is dated 1878. The text was poublished between 1879 and 1885. Provenance: the supplement volume with on the half title a hand-written and signed dedication by Guillaume Grandidier " à Monsieur Raymond Decary ...en souvenir de M. Lavauden ...". This volume with some pencilled ornithological and linguistic annotations. Raymond Decary was a French naturalist, ethnologist, geologist, historian, and linguist in Madagascar. In botany and zoology a dozen genera and hundreds of species are named after him. The herbarium he assembled for the Muséum nationale d'Histore naturelle in Paris, contains over 40,000 samples of Malagasy flora. He wrote more than 400 papers and twenty books. Paper slip with pencilled illustration and ornithological notes to plate 105 tipped in. Text volume with a second copy of plate 276 used as frontispiece (officially there is none). A few text sections and plates with some light foxing - much less than usual. In all, a truly remarkable, complete set. Very rare. Nissen IVB, 385; Nissen ZBI, 1676; Ronsil, 2037; Zimmer, pp. 264-265. 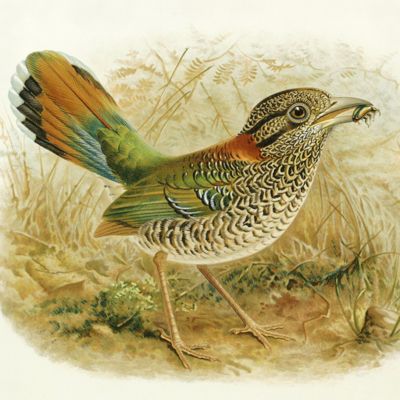