The entire section on the crocodiles, turtles and tortoises of this immense series of monographs on the natural history of Madagascar, founded and edited by the French explorer and naturalist Alfred Grandidier (1836-1921). Very rare today because the remaining copies were burned by an antiquarian bookseller when he moved his stock from Liechtenstein to the U.S. This is the only herpetological part. Léon Louis Vaillant (1834-1914) was a talented and prolific French herpetologist, ornithologist and malacologist who worked at the Natural History Museum in Paris. Alfred's son, Guillaume Grandidier (1873-1957) was an accomplished geographer, ethnologist and zoologist who published a great deal on the natural history of Madagascar, including many contributions in the Histoire physique, naturelle et politique de Madagascar, which was published between 1875 and 1942. Most parts, including this one, are scientifically very important and rare. "His most magnificent work in herpetology, co-authored with Guillaume Grandidier, was the volume on turtles and crocodiles (1910) in the Histoire Physique, Naturelle et Politique de Madagascar series, with its exquisite coloured plates. Regrettably, no other herpetological volumes were issued in this series" (Adler). Plate 27 with corrected (printed) caption mounted, as it should be. A very good, clean copy: this work is usually found quite foxed, but this copy has only some, mostly marginal foxing - nearly all the coloured plates are entirely clean. Adler I, pp. 58-59 (for Vaillant); Adler II, pp. 89-90 (for Grandidier); Nissen ZBI, 1676. Not in the Crane Library. 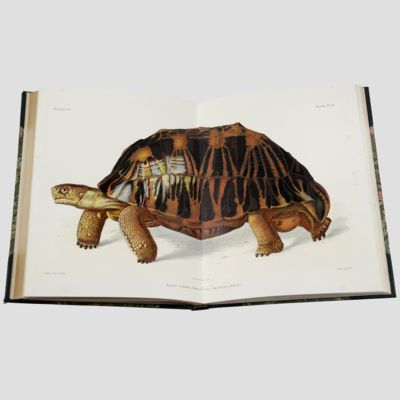