Superbly bound, first edition of this ground-breaking work by the French zoologist and anatomist Georges [Jean] Léopold Dagobert Cuvier (1769-1832), which lays the foundation for comparative zoology and phylogeny. Cuvier "laid the foundations of comparative anatomy. ... It is in his classification of the animal kingdom into four main groups, Vertebrata, Mollusca, Articulata and Radiata, that he so notably succeeded in giving a lead that has been followed by all his successors. In contradiction to the current view that the structure of an animal determined its functions and habits Cuvier held that an animal's structure was due to its functions and habits. ... He also saw that ... homogeneity in an individual should enable a competent naturalist to reconstruct a complete animal from any significant part of its anatomy" (PMM). Provenance: on the front pastedowns the modest armorial bookplate of Amable Guillaume Prosper Brugière, Baron de Barante (1782-1866) a French statesman and historian, his ancestors and his heirs. Associated with the centre-left, he was described in France as "the first man to call himself, without any embarrassment or restriction, a Liberal" (Wikipedia). The French poet, Anatole France called him an "Homme de beaucoup de tact, de sens et de finesse". A very beautiful and attractive copy. Nissen ZBI, 1013; PMM 276. 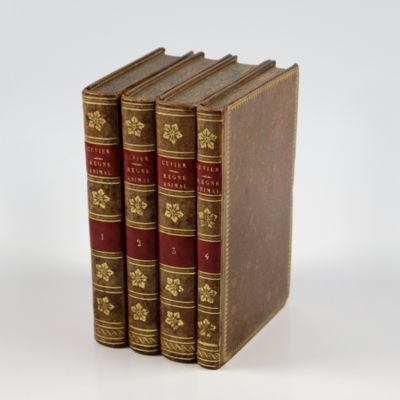