To list
« Previous Item Next Item »
The complete work, including the rare supplement, thus with all the original text and replacing text

Synoptical Flora of North America. I, II, Supplement. [All published, including the very rare supplement].

One of the most important contributions to the flora of the United States, including the very rare supplement, which is absent even in modern reprints. The work has a complicated history, mainly because Gray started with Volume II as the groups for the first volume were more or less covered in one of his earlier publications. In the preface to Volume II(I), Gray (1878) stated: "This volume commences where the Flora of North America by Torrey and Gray stopped, 35 years ago." Volume I then was completed by others long after the publication of Volume II. Actually, only Volume II(I) is entirely by Asa Gray. Volume I(I) was continued and edited by B. L. Robinson; and Volume I(II) co-authored by S. Watson, and also continued and edited by Robinson. Volume I(I) includes the later supplement (by Robinson), which has continuous pagination. Also present is the 1886 supplement to Vol. I(II), again with continuous pagination, except for the unnumbered additional title page and "notice". The volume is titled Synoptical Flora of North America, the Gamopetalae, being a second edition of Vol. I(II) and Vol. II(I) collected. It was printed in 1886. However, the pagination (445-480) doubles that of another section of "additions", present in the bound volume (pp. 445-474), which apparently formed a temporary section of Volume I(II). The supplement to Vol. II. Part I. covers pp. 389-392 and includes a p. 392(1), then continues from p. 393-492, with an extra printed correction slip pasted in, replacing pp. 393-402 in the original edition. Finally, there is a single loose leaf, which forms an overview/prospectus of the whole work, stating that a third fascicule, on Leguminosae was in preparation. This, however, was never published. Botanical bookplate of the Boyce Thompson Library on the front pastedowns, blind-stamp of the same on the title pages. The first volume also inscribed and dated on the first blank recto Jno. M. Coulter / May 28th 1878 / Hanover, Ind". The very brittle free endpapers of the first two volumes missing. Some small repairs at edges. Text pages clean, a few rather brittle, as always. An extraordinary set in very good condition. Stafleu and Cowan, 2132. 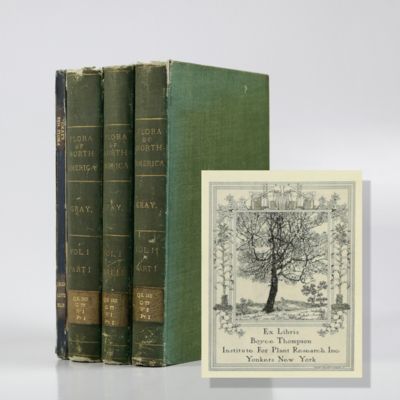 Synoptical Flora of North America. I, II, Supplement. [All published, including the very rare supplement].