To list
Next Item »
Rich botanical results of extensive travelling in India, Pakistan, Nepal, and Bhutan

Rare monograph describing all the Bengal species of Commelynaceae [Commelinacea, the dayflower, or spiderwort, family] and Cyrtandraceae [Cyrtandroideae, African violets and related groups], including several new species. As the title indicates, the species of adjacent regions are included as well. Trained at Cambridge, the botanist Charles Baron Clarke (1832-1906) travelled extensively in Bengal, Assam, Kashmir, Nepal, and Bhutan collecting and meticulously documenting the native flora. He constructed a massive herbarium that was eventually given to the Royal Botanical Gardens at Kew. Provenance: small oval stamp of the controversial German botanist Carl Ernst Otto Kuntze (1843-1907) on the title page. Kuntze "...edited the botanical collection from his world voyage encompassing 7,700 specimens in Berlin and Kew Gardens. The publication came as a shock to botany, since Kuntze had entirely revised taxonomy. His three-volume treatise, Revisio Generum Plantarum (1891) was widely rejected or deliberately ignored" (Wikipedia). A few spots. Several plates are carefully mounted on blank sheets as they were printed on slightly less tall sheets, the blanks filling the gaps at the foot. This seems to be usual, as we have seen exactly the same in another copy. Due to a printer's error, page 4 contains the same text as page 3. This is the list of plates, up to LXII. Comparison of the text, plates, and index, however, shows this copy to be complete, there is no text loss. A very good copy. Nissen BBI, 362; Stafleu and Cowan 1137. 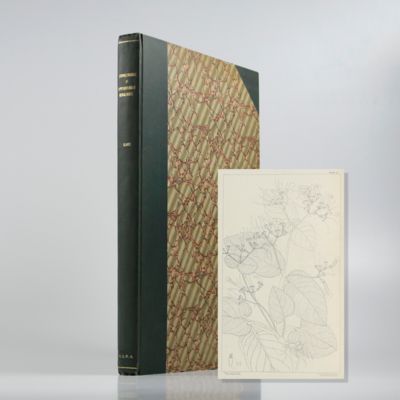