Rare first French edition (hence de Buch). The German geologist and paleontologist Christian Leopold von Buch (1774-1853) was "the most illustrious geologist that of the geologists taught by Werner" (Zittel). He traveled for two years, 1806-1808, in Scandinavia and in particular Lapland. Little had hitherto been known about the climatology and geology of these high European latitudes, and von Buch, in the published account of his travels contributed data of far-reaching significance. "For example, he pointed out that although the rocks in these regions follow the same general scheme of succession as Werner had drawn up, the granite could by no means be regarded as the oldest rock-formation, since he had observed it near Christiania in a position above the Transitional Limestone. Again he showed on mineralogical evidence that many of the erratic blocks scattered over the North German plains must have come from Scandinavia" (Zittel). The book also contains von Buch's memorable investigation of the proofs of the recent uprise of Scandinavia. "When he announced that the whole of the continent of Sweden from Frederikshald to Abo is now slowly rising above the sea, he did as much as any Vulcanist of his day in support of the theory of the earth promulgated by Hutton". Some light foxing on several pages and in the margins of the plates. Ward and Carozzi, 365; Zittel, History of geology and palaeontology, p. 61. 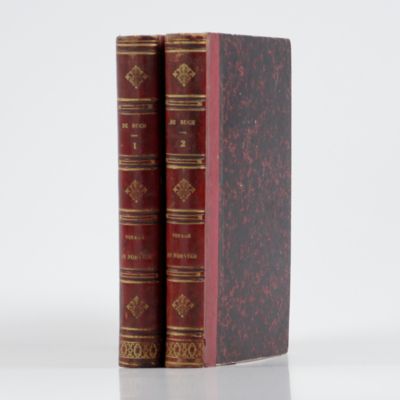