Reports of the collection made by the British Ornithologists' Expedition and the Wollaston Expedition in Dutch New Guinea, 1910-1913.

Rare report of two expeditions to New Guinea, printed in 150 copies only, of which this is number 109. It contains descriptions of new birds, mammals, reptiles, fishes, crustaceans, spiders, insects, and other invertebrates, and some ethnological observations, too, as follows: Volume I: W. P. Pycraft on human crania, (five plates); mammals by Oldfield Thomas; birds by Ogilvie-Grant, with eight plates (one in copy); batrachians and reptiles by G. A. Boulenger (four plates); freshwater fishes by C. T. Regan (one plate); river crabs by T. Calman; spiders by H. R. Hogg; Arachnida and Myriapoda by S. Hirst; Coleoptera by G. J. Arrow et al. (one plate); and the Hymenoptera by G. Meade-Waldo and C. Morley (one plate). All but the first three papers were also published in the Proceedings of the Zoological Society of London. Volume II: F. W. Edwards and E. E. Austen on Diptera (one full colour plate); Siphonaptera and Macrolepidoptera (two coloured plates) by Rothschild; Microlepidoptera by Durrant, Odonata by Campion; Rhynchota by Distant (coloured plate); Mollusca by Robson (two plain plates); Oligochaeta by De Martiis; Botany by various authors (six plain plates); Ethology by Haddon and Layard (eight plain plates); and Organic Limestones by R. B. Newton. Several papers were published in the Proceedings as well, but, for instance, not the finely illustrated Lepidoptera paper by Rothschild. The two large maps in Volume I show the whole island of New Guinea, as was known at the time, thus not including the unexplored parts of the central highlands and valleys, or the southwestern part, including the Aru islands. Uncut, thus with widest possible margins and some minimal fraying and chipping to the wrapper edges. Skilfully rebacked. One bird plate ( Ptilotis spp.) in a good, coloured reproduction, tipped in, otherwise an excellent set. Wood, p. 262. Not in Nissen. 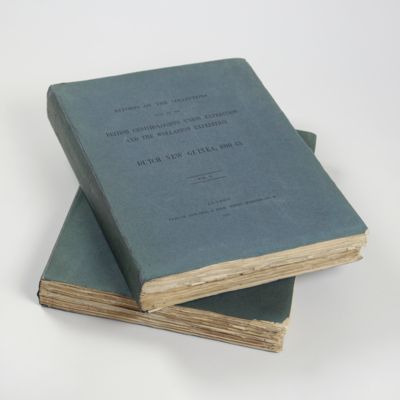 Reports of the collection made by the British Ornithologists' Expedition and the Wollaston Expedition in Dutch New Guinea, 1910-1913.