To list
« Previous Item Next Item »
Where is Baird? A letter to Hermann Schlegel

A letter by the German explorer, ethnologist, naturalist and herpetologist Prince Alexander Philipp Maximilian zu Wied-Neuwied (1782-1867). "He led a pioneering expedition to southeast Brazil between 1815-1817, from which the album Reise nach Brasilien, which first revealed to Europe real images of Brazilian Indians, was the ultimate result. It was translated into several languages and recognized as one of the greatest contributions to the knowledge of Brazil at the beginning of the nineteenth century. In 1832 he embarked on another expedition, this time to North America, together with the Swiss painter Karl Bodmer" (Wikipedia). The letter, written in German, and in a rather difficult handwriting, is addressed to the German/Dutch zoologist and naturalist Hermann Schlegel (1804-1884), and dated 4 December 1851. Schlegel is perhaps best remembered as a herpetologist and ornithologist, director of the natural history museum in Leiden, and ‘discoverer’ of the famous bird painters John Gerrard Keulemans, Joseph Smit and Joseph Wolf. The letter by Wied deals with material to be sent to "Baird, Assistant Secretary at the Academy of Natural Sciences of Philadelphia". Most probably the "Baird" mentioned was the American ornithologist, herpetologist and ichthyologist Spencer Fullerton Baird (1823-1887), who, however, was not connected to the Academy in Philadelphia but to the Smithsonian Institution in Washington DC, where – in 1850 – he had become, indeed, assistant secretary. Perhaps Wied needed confirmation of Baird's whereabouts, and Schlegel most probably knew the answer. Some toning at the right margin, otherwise in very good condition. Adler I, pp. 22-23. 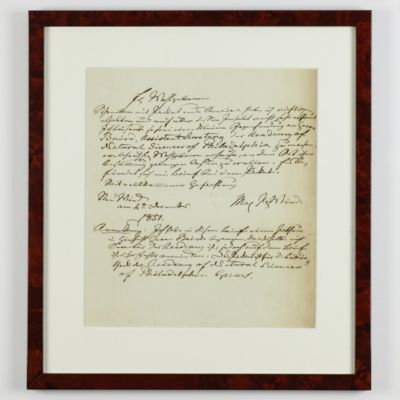