To list
« Previous Item Next Item »
Robert Mertens at work: a revealing manuscript

[Original manuscript of his fourth paper on reptile hybrids]

The original manuscript of Robert Mertens's publication on reptiles, Über Reptilienbastarde IV. Published in Senckenbergiana Biologica, volume 49, pp. 1-12. Professor Robert Mertens (1894-1975) was one of Germany's foremost zoologists and herpetologists during the 20th century. In 1919, after completing his studies, he became first assistant of the Senckenberg Museum in Frankfurt am Main. In 1920 he became curator for herpetology, and in 1934 head of the zoological section. Finally, in 1947 he became director. Mertens was not only one of the foremost herpetologists of his time, but also one of the most productive of all time. This manuscript reveals some of his methodology. First he carefully wrote a draft in blue ink, usually with few original additions and corrections, the he made new corrctions and additions in pencil. Most leaves are separately numbered, but some leaves have "a" numbers, being inserted additions, or no number, perhaps indicating replacements. All leaves in very good condition. Adler I, pp. 98-99; Schirner, 695. 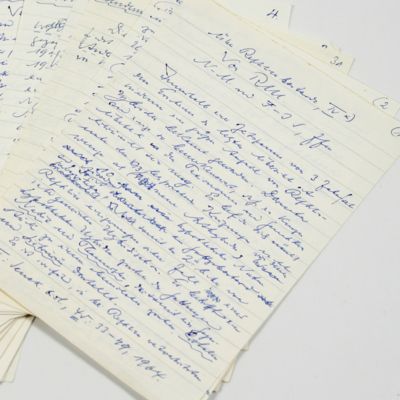 [Original manuscript of his fourth paper on reptile hybrids]