The original manuscript of Robert Mertens's publication Leopold Fitzinger: his life and herpetological work. Fitzinger's Systema reptilium II-VI, published in the Miscellaneous Publications of the Society for the Study of Amphibians and Reptiles in Athens, Georgia (U.S.A.). Interestingly, the manuscript is entirely in German, whereas the published paper is in English. Professor Robert Mertens (1894-1975) was one of Germany's foremost zoologists and herpetologists during the 20th century. In 1919, after completing his studies, he became first assistant of the Senckenberg Museum in Frankfurt am Main. In 1920 he became curator for herpetology, and in 1934 head of the zoological section. Finally, in 1947 he became director. Mertens was not only one of the foremost herpetologists of his time, but also one of the most productive of all time. This manuscript reveals some of his methodology. First he carefully wrote a draft in blue ink, usually with few original additions and corrections, then he made new corrections and additions in pencil, and - particular to this manuscript - in black ink. Most leaves are separately numbered, but the several have an "a" and "b" number, apparently replacing an earlier, plain numbered leaves, with additions. The last leaf has some cancelled notations on its verso. All leaves in very good condition. Adler I, pp. 98-99; Schirner, 773. 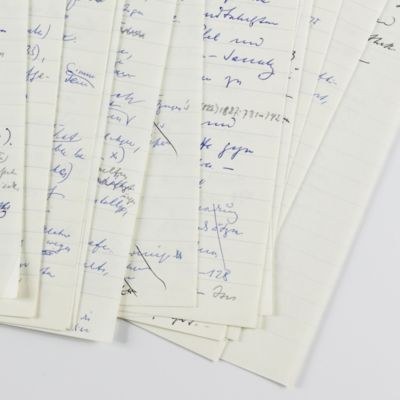