Written by the British naturalist John Ellis (ca. 1710-1776). A detailed paper on the Carolinian "mud iguana", which Ellis regarded as peculiar because it had both lungs and gills, and only two legs. Two specimens were sent to Linnaeus in Upsala, and Linnaeus's opinion, presented in a letter to Ellis, is quoted in translation. Linnaeus here proposed the genus Siren for this species of salamander. This may predate the introduction of the genus in the 1766 edition of the Systema naturae, in an unpaginated addendum. Later, Linnaeus named a plant genus after Ellis. The paper ends with a postscript in which it is reported that Dr. Garden [the Carolinian naturalist Alexander Garden (1730-1791)] was "fully convinced, that it is quite a new genus in the animal kingdom". Added is the four-page description of the anatomy of the animal, written by John Hunter and published in the same volume of the Philosophical Transactions. A very clean, wide-margined copy. Rare. Soulsby, under 2335. 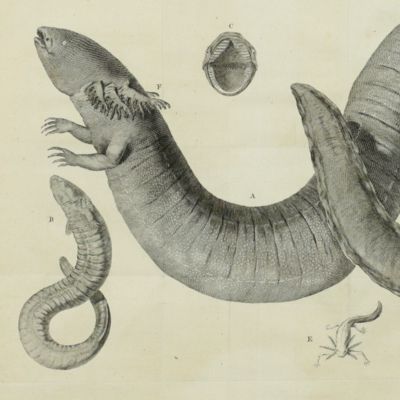