To list
« Previous Item Next Item »
From the library of a Nobel Prize laureate: The first accurate description of the anatomy of a venomous snake

Marco Aurelio Severino (1580-1656), often Latinized to Marcus Aurelius Severinus, was an Italian surgeon, anatomist, and "an early student of the anatomy of reptiles" (Adler). As noted by Adler, "Severino's only strictly herpetological book is ' Vipera Pythia' (1650), reissued with slight modifications in 1651" (this copy). Provenance: "For Peyton Rous from Charles de Kay .... 12 April 1931", written on the front wrapper verso. "Charles Augustus de Kay, or DeKay (1848-1935) was a linguist, critic, writer of poetry and prose, American Consul General in Berlin, and fencer. "He was an art and literary critic for The New York Times for 18 years" (Wikipedia). His daughter, Marion Eckford de Kay (1896-1985) was married to Francis Peyton Rous (1879-1970), an American Nobel Prize-winning virologist. "Rous was involved in the discovery of the role of viruses in the transmission of certain types of cancer. On October 13, 1966, he was awarded a Nobel Prize in Physiology or Medicine for his work. In 1911, as a pathologist, he made his seminal observation that a malignant tumor (specifically, a sarcoma) growing on a domestic chicken could be transferred to another fowl simply by exposing the healthy bird to a cell-free filtrate. This finding, that cancer could be transmitted by a virus (now known as the Rous sarcoma virus, a retrovirus), was widely discredited by most of the field's experts at that time. Since he was a relative newcomer, it was several years before anyone even tried to replicate his prescient results. However, some influential researchers were impressed enough to nominate him to the Nobel Committee as early as 1926 (and in many subsequent years). Rous finally received the award 40 years later at the age of 87; he remains the oldest recipient of the Nobel Prize for Medicine or Physiology" (Wikipedia). Uncut. Spine and shield broken and heavily chipped. Lacking the author's portrait, as often. Rather weak damp-stain in the top margin of a few leaves (apparently from before binding). In all a very good, complete copy. Adler II, pp. 15-16. 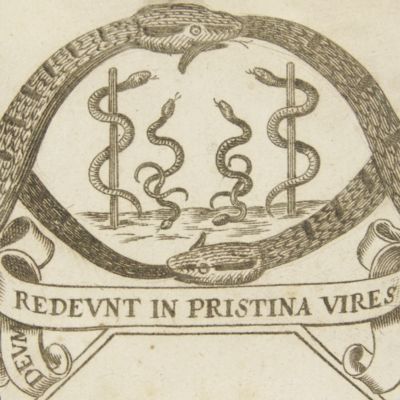