This spectacular plate with fine, accurate images of reptiles and amphibians from the Nile and Egyptian dessert was published as part of the results of the researches of the French scientific expedition to Egypt that was part of Emperor Napoleon Bonaparte's military campaign (1798-1801). The author, the French vertebrate zoologist Étienne Geoffroy Saint-Hilaire (1772-1844) was "chosen a member of Napoleon's great scientific expedition to Egypt as part of the natural history and physics section of the Institut d'Égypte; 151 scientists and artists participated in the expedition ... On the capitulation of Alexandria in August 1801, he took part in resisting the claim made by the British general to the collections of the expedition, declaring that, were that demand persisted in, history would have to record that he also had burnt a library in Alexandria." (Wikipedia). Edges with minimal fraying; some, mostly marginal, spotting but generally clean and in all a very good, attractive copy. Nissen ZBI, 4608. 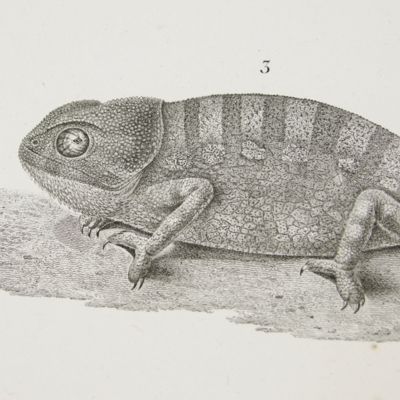