A seldom-seen zoological survey of the Abor Hills, Arunachal Pradesh, a region in the Himalayas close to border with China. The editor, the Scottish zoologist (chiefly malacologist, entomologist and ichthyologist) Thomas Nelson Annandale (1876-1924) is the author of several parts or chapters of this work. Published as Records of the Indian Museum, Volume VIII, which - mainly due to WWI - took 11 years to be completed, or, rather, as the editor explains, terminated. Many new species in all different kinds of zoological groups are described and illustrated. The volume includes no fewer than nine separate papers on Mollusca, by such authors as Gude, Preston, Godwin-Austen and others. Reptiles and Batrachia are described by Annandale himself. The second, fifth, sixth and thirteenth (last) part are missing, together with the contributions numbered VIII-XI, XXX-XXXVIII, and L, chiefly containing coleopterological contributions, but also mammals, moths, isopods, Dermaptera, Diptera and a few small invertebrate groups. The Mollusca, birds, reptiles and amphibians, and fish are complete, as are many other groups. Wrappers of the first part torn, several parts with marginal damp-staining more extensive in Part XI, but much less visible on the plates; vague stamp on front wrappers, otherwise a very good, clean set. Neither in Cat. BM(NH) nor in Nissen. 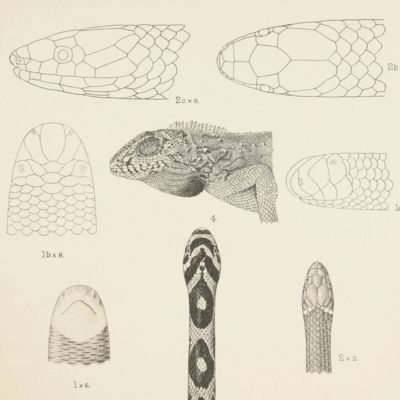