An extremely rare complete set of Maurice Cossmann's series on fossil (and present-day) molluscs. This work is more important to molluscan taxonomy and nomenclature than the better-known, more common and somewhat later works by Thiele and Wenz. In this series, many taxa are reviewed, and many new names are introduced. All volumes are rare to very rare; a complete set is extremely rare. It contains descriptions of new genera, and many new species, mostly well-preserved Mesozoic and Tertiary fossils, but also extant taxa. Numerous synonyms are proposed and homonyms renamed. The last part was largely in the press when Cossmann died. The editor, Dolfuss, complained that part of the manuscript could not be found, and that checking the references was impossible with Cossmann's library unavailable. A fine, uniformly bound set. Parts I-VI are bound in two text volumes and a separate atlas; parts VII-VIII are bound in one volume, as are IX-X, and XI-XII; and part XIII is bound separately, for a total of seven volumes. The text figures of part XII are partly printed on three plates, numbered A-C. These plates are not counted, but the text figures are included in the total. Provenance: stamp of the American malacologist Richard Irwin Johnson (1925-2020) in the top margin of the front free endpaper recto and first text leaves. A very good, clean and unmarked set. Cat. BM(NH), p. 388. Although very well-illustrated not in Nissen ZBI: a major omission. 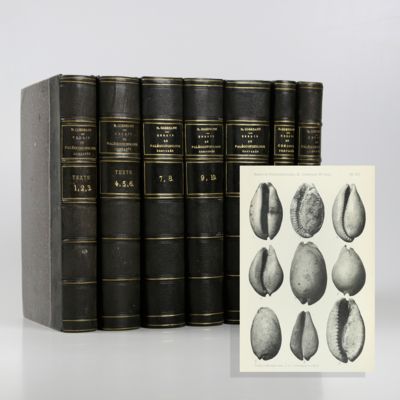