The rare scientific, zoological results of an expedition to Somalia, in particular Juba Land, led by the Italian army captain Vittorio Bottego (1860-1897). A travelogue, by Bottego, titled L'esplorazione del Giuba. Viaggio di scoperta nel cuore dell'Africa, and published in 1900, is far more common. "In his first expedition Bottego concentrated on tracing the channels of the tributaries of the Ganale Doria, that he named after the Italian biologist Giacomo Doria. With Captain Matteo Grixoni, Bottego left Bardera on 30 September 1892, with one hundred and twenty-four men. They reached the Shebeli River at Imi on 7 November. After eight days they crossed the river, entering the country of the Arsi Oromo, who proved hostile to Bottego. He passed through Arkebla and reached the Ganale Guracha ("Black Ganale") on 11 December, along whose banks he led his men upstream for 20 days. Concluding that this was not the main stream of the river, Bottego left the river in a west-south-western direction until he reached the Ganale Doria, or the main fork of the Ganale, on 16 January 1893. Sick with fever, here Bottego was left by Grixoni who marched for the coast on 15 February with 30 men. Four days after Grixoni left, Bottego pushed inland as far as Mount Fakes, but unwilling to encounter raiding parties of the Ethiopians, he returned to the camp where Grixoni had left him. Bottego then crossed the tract separating him from the Dawa, and ascended that river until lack of provisions compelled him to retrace his steps. His party reached the Ganale Doria once more after six forced marches, in the course of which eleven men died of hunger. Two more died in camp from exhaustion, and two were drowned while hunting hippopotamuses. In his second expedition (1895-1897), Bottego ventured into the then unknown region of the upper Juba, Lake Rudolf and the Sobat. He was the first European explorer to follow the course of the lower Omo River to its confluence with Lake Turkana. He reached and first found Lake Abaya ... He then tried to return through Ethiopia, unaware that the country was at war with Italy, let alone that there had been a recent Ethiopian victory at Adwa. He was killed in the Maji range near Jellen when he was attacked by an Oromo tribe. His body was never recovered, and the account of his demise was told years later by two of his companions, Vannutelli and Citerni, who survived but were kept in prison for two years by Menelik II, emperor of Ethiopia" (Wikipedia). Of this zoological volume, which contains numerous new species descriptions, those by G. A. Boulenger on herpetology (with four fine, lithographed plates), and by R. Gestro on Coleoptera (232 pp., several text figures) are among the most important. Other contributions deal with specific groups of beetles, (e.g., Dytiscidae, and Gerinidae, and Curculionidae), with mammals, fish, terrestrial molluscs (by Von Martens), Orthoptera, Diptera, ants, spiders, Acari, etc. Published as the museum's Annali 2(XV), being the complete volume. Uncut. Some soiling and light wear to the wrappers, short tear to map margin, otherwise very good, clean. Neither in Cat. BM(NH) nor in Nissen. 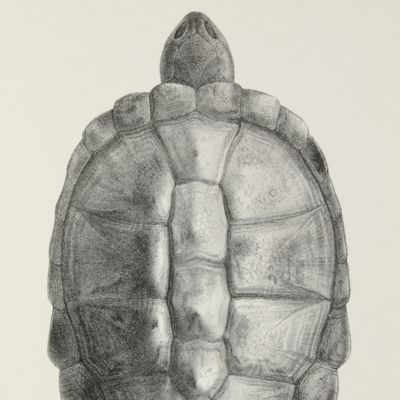