The Pharmaceutica is a very rare work, seldom found complete - even individual plates of plants are rare. This print shows the mistletoe. "It has a significant role in European mythology, legends, and customs. In modern times, it is commonly featured in Christmas decoration and symbology. When Christianity became widespread in Europe after the 3rd century AD, the religious or mystical respect for the mistletoe plant was integrated to an extent into the new religion. In some way that is not presently understood, this may have led to the widespread custom of kissing under the mistletoe plant during the Christmas season. The earliest documented case of kissing under the mistletoe dates from 16th century England, a custom that was apparently very popular at that time. Mistletoe is commonly used as a Christmas decoration, though such use was rarely alluded to until the 18th century. According to custom, the mistletoe must not touch the ground between its cutting and its removal as the last of Christmas greens at Candlemas. It may remain hanging throughout the year, often to preserve the house from lightning or fire, until it is replaced the following Christmas Eve. According to an old Christmas custom, a man and a woman who meet under a hanging of mistletoe were obliged to kiss. The custom may be of Scandinavian origin. It was alluded to as common practice in 1808 and described in 1820 by American author Washington Irving in his The Sketch Book of Geoffrey Crayon, Gent. 'The mistletoe is still hung up in farm-houses and kitchens at Christmas, and the young men have the privilege of kissing the girls under it, plucking each time a berry from the bush. When the berries are all plucked the privilege ceases.' In Germany, the Christmas tradition is that people who kiss under mistletoe will have an enduring love or are bound to marry one another" (Wikipedia, combining various sources). This plate is in excellent condition; only some very minor marginal spotting. No creasing; no dents or tears present. The colours are very strong and natural. Nissen BBI, 784; Stafleu & Cowan (under 2834) "Not seen". 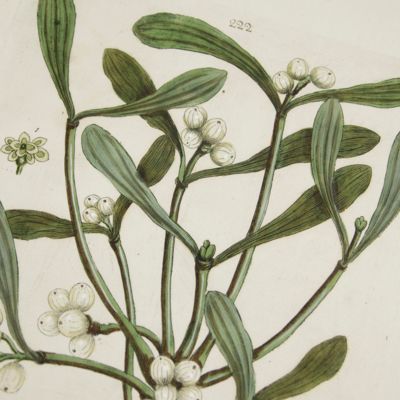