A seldom-seen thesis, dealing with poisonous oil derived from the root of the plant Cicuta virosa, commonly known as cowbane or northern water hemlock. The roots look similar to carrots but are very poisonous. Written by the Dutch biochemist and teacher Allard Hendrik van Ankum (1843-after 1877). Van Ankum was the high school chemistry teacher of Dutch Nobel Prize laureate Heike Kamerlingh Onnes (1853-1925). Kamerlingh Onnes was an average student, but Van Ankum saw his potential. After a recommendation by Van Ankum, Kamerlingh Onnes became a student of the great German chemist and physicist Robert Wilhelm Eberhard Bunsen (1811-1899). From there he went on to become one of the most important physicists of his time. The last eight, unnumbered pages contain the author's "Stellingen" (propositions to be defended at inauguration), which show a unique boldness in fields such as vertebrate anatomy, palaeontology, and mathematics. In one proposition, Van Ankum declares that Bunsen's method of measuring volumetric mass density (specific mass) is superior to others. Short inscription by the author on first blank. Some abrasion to the wrappers due to removal of a library label; title page lower margin cut, otherwise a very good, unmarked copy. Not in any major reference work. 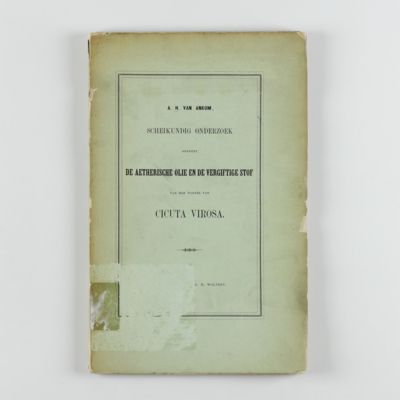