Swift and lively scenes of Paris, around 1925 - and one situated in Berlin - with people behaving ‘vulgarly’ and breaking the rules: old, rich fat men openly eyeing a virgin and tossing change around; ladies wrestling before an utterly bored night club audience; a ‘hot’ jazz club with young women dancing intimately with exotic strangers; and - perhaps more innocent - a nudist camp near Berlin; all drawn in lively style by Chas Laborde (1886-1941), who was in the thick of it. Chas was the anglicized pseudonym of the French writer, journalist, engraver, painter and illustrator Charles Laborde who was born in Buenos Aires (Argentina) and died in Paris during WWII. He was a student of William Bouguereau at the Académie Julian and Luc-Olivier Merson and at the École beaux-arts in Paris. He is particularly known for his drawings of nudes, but this suite shows daily life in the French capital during the roaring twenties. Twenty plates were published under the title Rues et Visages de Paris. A similar work, Rues et Visages de Berlin was published in 1930. These proof plates, however, are different, and may have not all been included in the printed books. We could not find any on the website, chaslaborde com. As in most of his works, the emphasis of this suite is on the more shady sides of the town. Laborde contributed to many top-quality magazines of his time such as Vogue and Vanity Fair, but also to l'Assiette au Beurre, Le Sourire, La Baïonnette, La Gazette du Bon Ton, Comœdia, Der Querschnitt, La Chronique filmée du Mois, Paris Toujours, and Le Crapouillot, as well as to newspapers such as Le Figaro, Paris-Midi, and Paris-Soir. In addition he was a prolific illustrator, contributing to more than 60 books. Uncut - fore edges a bit uneven; slight marginal fraying and soiling; pinpoint hole in one plate; otherwise in excellent condition. Rare, if not unique. Bénézit 2, pp. 454-455. 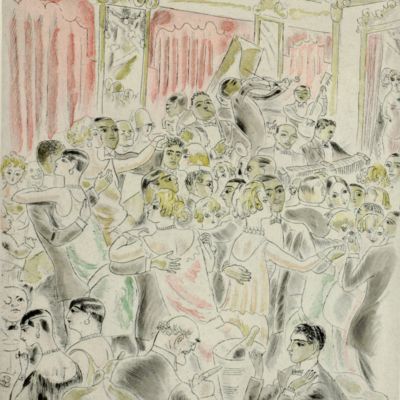