To list
« Previous Item
A very good, complete set including the rare atlas

Rare topographical, geological and faunal description of China and all that was published. The atlas is particularly rare. The Carnegie Expedition to China was conceived by the American palaeontologist Charles Doolittle Walcott (1850–1927) who was to describe the rich Cambrian faunas. These results include the description and illustration of numerous fossils, among which the trilobites stand out. Walcott "...is famous for his discovery in 1909 of well-preserved fossils, including some of the oldest soft-part imprints, in the Burgess Shale of British Columbia, Canada '... [he was] administrator of the Smithsonian Institution from 1907 to 1927" (Wikipedia). The (Recent) zoological part by the American geologist Eliot Blackwelder (1880-1969) is restricted to vertebrates, mainly birds. It contains six fine, full colour plates and includes the description and illustration of a new subspecies of wren (the actual description by Charles Wallace Richmond [1868-1932], a true ornithologist). Smaller sections are devoted to the herpetology, and the Mammalia. Collected beetles were mentioned but supposed to be described elsewhere. A chapter on Syllabary for the transcription of Chinese sounds in the dialect of Peking modified for literary purposes (18 pp.) is by Friedrich Hirth. The folio atlas is by Bailey Willis, "geologist in charge". Next to Richthofen's China Ergebnisse (1877-1912), this is one of the major topographical and geological monographs on China. One text part wrapper and the atlas rather poorly repaired at edges. Front wrapper of atlas partly mounted. Small library stamps on cover. However, in all, a very good, complete set. Cat. BM(NH), p. 2329. 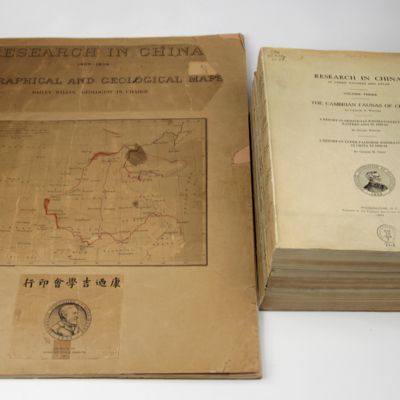