Very early applied radiology [Röntgen photographs, X-rays] including the first use of X-rays in authentication of fine art (i.e. painting by Albrecht Dürer).

A set of very early Röntgen photos; in all, seven anatomical and two art-historical X-rays, as follows: (1) the large-scaled (34.4 x 23.6 cm) negative of a painting ascribed to Albrecht Dürer, named "Der segnende Heiland" (Christ with a crown of thorns). The painting, once owned by Mr. Friedrich Burger, who ran an art gallery in Munich, had first been extensively described by Dr. Oscar Freiherr Lochner von Hüttenbach in a paper in 1894, where Hüttenbach clearly states that the painting should be attributed to Albrecht Dürer. Apparently Mr. Burger still had trouble selling the painting, because in January 1897, he let Friedrich Haller & Söhne try a completely new method of authenticating his painting; by means of X-ray. According to a newspaper article clipped from the "Allgemeine Zeitung", mounted on the backside of the card board, and dated in a contemporary hand "26/I 97" (= 26 January, 1897) this X-ray indeed proved that this was a true Dürer, marking the photographs for sale as the first known attempt to verify a painting's authorship by this revolutionary method. The story was considered so important, it was repeated at length in the New York Daily Tribune of 11 April 1897: “A new test for old paintings. The genuineness of an Albrecht Duerer proven by X-Rays. The practical value of Röntgen´s famous discovery lies in its revelations of the unseen. While the applications of this instrument of research have hitherto been confined almost entirely to surgical diagnosis, yet there are other important uses to which it can be put...” The X-rays reveal the date 1524, whereas previously the work was thought to date from 1521, and a previously unknown Gothic text. This is the oldest known verification of a piece of fine art by the means of X-rays revealing information about an old masters paintings' history hidden behind layers of paint, varnish, and dirt. The present whereabouts of this painting are unknown. We presume it was lost during WWII, or (less likely) it is hidden away somewhere in a private collection. It was not until the 1920's that X-rays were regularly used in the analysis of old paintings. From the newspaper article we learn something interesting about the rarity of these particular X-ray photographs, too; as it states that only a few copies were sent to a handfull of distinguished people in Europe. "The Queen Regent of Spain having been thus complimented, she sent her specimen to one of the academies of art in Spain, and it was the subject of favorable comment there." (2) the somewhat smaller scaled positive of the former number (21.5 x 15 cm), here the painting is depicted much more clearly with better contrast; (3) a 42-year-old woman's skull; (4) a man's hand, signed in the photographic plate "Armin Flümthal - similar to the first X-Ray in history, depicting either Röntgen's or his wife's hand"; (5) the lower part of the body of a 13-year-old female with malformed legs; (6) a man's foot with a crocked grown fracture; (7) the pelvis of a 17-year-old woman with a deformed pin to fix a fracture; (8) the pelvis of a 12-year-old boy - all of which so far are negative proofs; (9) the large-scaled (life-sized?) positive of #4 above, stating the time of exposure of three minutes (!). read more
All photos in an exceptionally mint condition. All with the atelier's label mounted to the back side. Provenance: the medical doctor, Karl Theodor, Duke in Bavaria (1839-1909), who founded the Augenklinik Herzog Carl Theodor (the Duke Charles Theodore Eye Clinic) in Munich in 1895. read less
Very flexible return policy
Secure payments by Adyen
Sent in 2 business days with Track & Trace 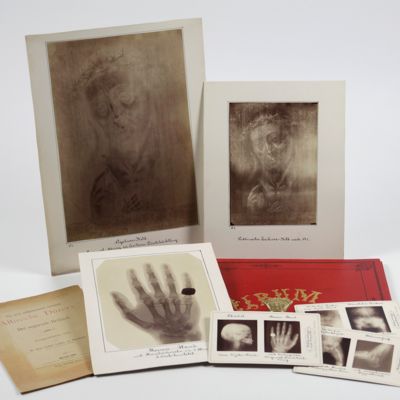 Very early applied radiology [Röntgen photographs, X-rays] including the first use of X-rays in authentication of fine art (i.e. painting by Albrecht Dürer).