To list
« Previous Item Next Item »
From an unknown Andes expedition: an exciting and unique collection of original glass positives

A rich collection of photos on glass from a time and area poorly documented. All the photos were made during a little-known geographical and anthropological expedition to Ecuador, Peru and Chile between 1909 and 1913. They show people, buildings (churches, factories), views, including street views, mountain views, etc., as well as volcanoes, geological features, sometimes including expedition members and material, of, chiefly, Ecuador, and of northern Chile, and Peru, including the upper Amazon. Over 200 photos are from Ecuador, several showing volcanoes, including some with mission crew-members amidst fumaroles. Other photos are anthropological, showing the people of the (high) Andes, as well as from the Amazon region, and people in cities such as Lima, Santiago, and Quito. Pictures include the Trans-Andean railroad (several views); views of harbours (Valparaiso, Callao), streets, bridges, statues, a Roman Catholic procession, the army of Ecuador, and of Chile, on parade. A few show maps, with the expedition's itineraries. Still others show llamas, a flying condor, the unloading of a cow from a ship, Indian pottery, a beautiful girl from Chile (twice!), etc., etc. In general, there are 14 photos of expedition members and camps, 175 of various views on very diverse landscapes from the tropical rainforest to the glaciers of the high Andes. 17 volcanological photos and 19 others. The Parisian medical doctor, anthropologist, and member of the French 'Société de Géographie', Marie Joseph Gabriel Pierre Reinburg (1877-1936) came from a family of organ builders in Strasbourg. He published on the Marawan (Guyane) Indians (1921), and a paper titled Le Vénézuéla pacifique et travailleur (1927). He also wrote a paper on South American plant hallucinogens Contribution à l'étude des boissons toxiques des Indiens du Nord-Ouest de l'Amazone: l'ayahuasca, le yajé, le huánto. Étude comparative toxico-physiologique d'une expérience personnelle. He was a member of the 'Société des Américanistes'. For an unknown reason (perhaps the outbreak of WWI) the material gathered during this Andes-expedition remained unpublished and has been lying dormant for more than a century. The Muséum national d'Histoire naturelle in Paris contains his manuscript on the Peruvian Indian Jivaro language, which may have been based on data collected during the same expedition, also never published. It seems likely that the glass positives were used as lantern slides, but there are no records of this use. A few photos are partly toned and very few with a broken glass or without the second (protective) part of the glass; several are in full colour, or enhanced with colour. Nearly all positives are in a very good state, crisp, without fading. Very interesting, unrecorded expedition waiting to be discovered and researched. 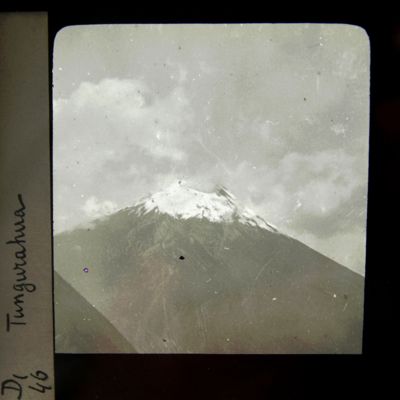