A collection of three original, large photo prints of indigenous people most probably of Beja people. The photo images are as follows: one old man in traditional clothing, with a knife in a band around his left arm - typical for the male members of the northern Beja tribes, perhaps Bisharin, Ababda or Hadendoa, whose territory occupied the middle part of eastern Egypt east through northeastern Sudan into northwestern Eritrea (Beni Amer and Habab). These tribes were well-known as camel drivers who guided caravans from Egypt to Sudan through Nubia, and from the Red Sea coast to the Nile valley. Beja were not an uncommon sight in, for instance, Assuan. (information provided by Mr Dick Nauta). The photo is numbered 516; two women in traditional clothing, one holding a bag with cowry ornaments, the other a tambourine. The photo is numbered 841; two children, most probably siblings, one with a knife carried in the same manner as the old man. This photo is numbered 510. The name Zangaki is handwritten in the lower left corner (apparently in the negative and printed with the image). Part of the same name is visible in the lower left margin of photo 841. Versos are blank. The Greek Zangaki brothers, George and Constantine, were active in the Egyptian region around 1870-1890. "Their photographs of late 19th century Egypt, though produced for sale to the flourishing European tourist trade to Egypt, are highly prized by historians and collectors for their insights into life at the time" (Wikipedia). The Princeton University Library Department of Rare Books and Special Collections holds a collection of Zangaki photos. Photos very lightly creased, due to the thin paper used; a few very short tears, slight yellowing, but generally in very good condition. 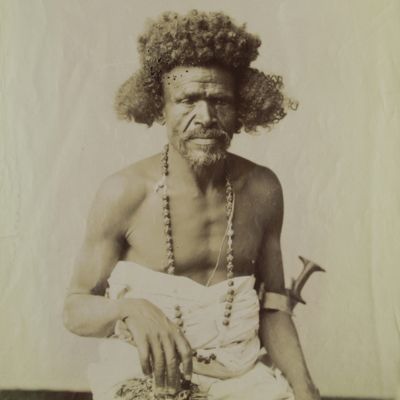