To list
« Previous Item Next Item »
Highlights of Dutch news photography: Cor Jaring and the wedding of Beatrix

A suite of press photos by the Amsterdam photographer, journalist and artist Cor Jaring (1936-2013). Probably all taken on 10 March 1966, the day of the controversial wedding of the later queen of the Netherlands, Beatrix, and the German diplomat Claus von Amsberg. The wedding was controversial because Von Amsberg was German, and during WWII member of the Hitler Jugend. The photos show demonstrators (provos) and police officers making arrests on and near the Royal Palace at Dam Square. One photo shows the tour of the Gouden Koets (golden coach) with the princess and prince, heavily guarded by the police and military. Jaring is perhaps most famous for his photos of John Lennon and Yoko Ono during their "Bed-In" at the Amsterdam Hilton in 1969. Some minor signs of handling, but no other blemishes, and in general in a very good condition. 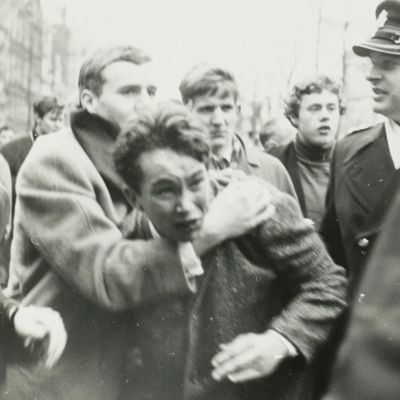