Photograph by the Brussels-based photographer Wilhelm Nestler (active in the 1880s-90s), depicting the famous American ‘woman with a beard’, Annie Jones Elliot (1865-1902). “She toured with showman P. T. Barnum as a circus attraction. Whether the cause of her condition was hirsutism or an unrelated genetic condition that affects children of both sexes and continues into adult years is unknown. Many photographers, including Mathew Brady, took her portraits during her lifetime, which were widely distributed. As an adult, Jones became the country’s top ‘bearded lady’ and acted as a spokesperson for Barnum’s ‘Freaks’, a word she tried to abolish from the business. Jones married Richard Elliot in 1881, but divorced him in 1895 for her childhood sweetheart William Donovan, who died, leaving Jones a widow. In 1902, Jones died in Brooklyn of tuberculosis. Jones was born in Marion, Virginia, the county seat of Smyth County, in the southwestern end of the Commonwealth, on July 14, 1865. When Jones joined Barnum’s exhibition as a child of only nine months, Jones’ parents received a $150-a-week salary. She was billed as a new ‘infant Esau’. By the age of five, she had a mustache and sideburns, beard and became well known as the ‘Bearded Girl’. US photographer Mathew Brady took Jones’ portrait as a child in 1865. A number of additional portraits were taken of Jones during her lifetime and were widely distributed. In an incident which may have been one of Barnum’s publicity stunts, a New York phrenologist kidnapped Jones when she was a young child. Barnum and the police found her exhibited in a church fair. When the man claimed the child as his, the matter went to court. The judge had Jones separated from the others before it was her time to testify. When the child was taken to the courtroom, she went straight to her parents when she saw them. The judge declared the case closed.” (Wikipedia). The name Annie Jones in an old hand in thin pencil on verso. Weak traces of handling, slightly toned, but generally clean and in a very good condition; the photo has not faded. 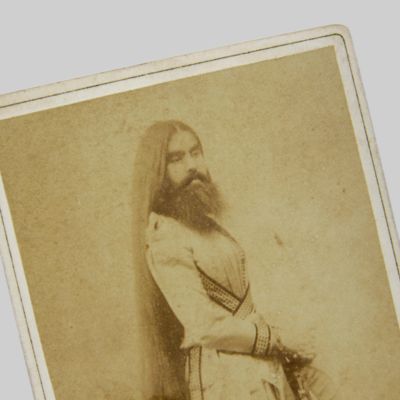