Letter by the Swiss-American zoologist Alexander Agassiz (1835-1910), dated 12 May 93, to (by implication) the French zoologist Alphonse Milne-Edwards (1835-1900). In this letter, Agassiz records the dispatch of 50 offprints of Milne Edwards's contribution to the results of the deep-sea dredgings by the USS Blake, regarding the pagurids, or hermit crabs. This work is titled Déscription des crustaces de la famille des paguriens recueillis pendant I'expedition. Reports on the results of dredging, under the supervision of Alexander Agassiz, in the Gulf of Mexico (1877-78), in the Caribbean Sea (1878-79), and along the Atlantic coast of the United States (1880), by the U.S. Coast Survey steamer Blake, and published in the Museum's Memoirs Volume 14. This was one of the most important deep-sea cruises by an American vessel. Most species collected were entirely unknown. Written on MCZ stationery with printed text: "Museum of Comparative Zoology, Cambridge, Mass.". Originally horizontally double-folded. A tiny smudge in the lower margin, otherwise clean, very good. 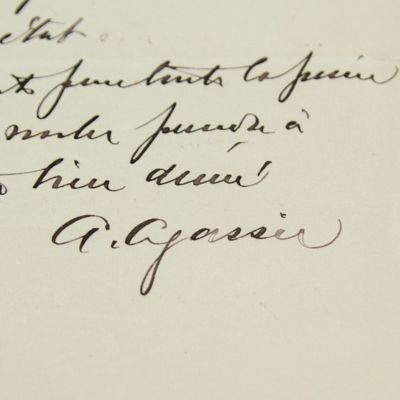