A rarely seen first edition of a monograph describing arguably 17th-century France’s greatest feat of hydraulic engineering, namely the creation of a waterway between the Atlantic Ocean and Mediterranean Sea. Written by Comte Antoine-François Andréossy (1761-1828), Général de Division et Inspecteur-Général du Corps de l'Attilerie. His function underscores both the commercial and military value of this intercoastal waterway. Andréossy was a Franco-Italian nobleman, who also served as a French diplomat and parliamentarian. He served under Napoleon Bonaparte, to whom this work is dedicated. "He was a great-grandson of the celebrated civil engineer and architect of the Canal du Midi, François Andréossy (1633-1688). The latter was a French engineer, cartographer, and a citizen of Narbonne. After completing his engineering studies in Paris, Andréossy went to Italy in 1660 to study Italian canal technology in Lombardy and Padua. He returned from the trip and sought out Pierre-Paul Riquet as a patron. Riquet was beginning his investigation into the possibility of building a canal across southern France from the Atlantic to the Mediterranean. Andréossy supplied the technical expertise that Riquet lacked and became Riquet's right-hand man throughout the construction of the canal. He was also responsible for the levelling and the drawing of maps. He monitored the construction and assisted Riquet until Riquet's death. Andréossy continued to work at the canal and serve the family of Riquet until he died in Castelnaudary on 3 June 1688. Andréossy's descendants continued like him for a century. His great-grandson, the general Antoine-François Andréossy, argued in his Histoire du Canal du Midi that his ancestor should be considered the father of the Canal du Midi, instead of Riquet" (Wikipedia). This work includes a fine, large map of southern France, including the canal from the river Garonne to the French Mediterranean coast. Provenance: the name C. A. de Bruijn handwritten in the top margin of the front free endpaper recto. Slight wear to the boards, two tables a bit browned, but the text, map and other tables clean. A simple library stamp of five characters in the top margin of the title page, and a worn label on the spine foot, otherwise a very good, clean copy. We found only one auction record, of a poor copy. In 1804 a second edition was published. Of this first edition, OCLC reports a few copies in European libraries and none outside Europe. 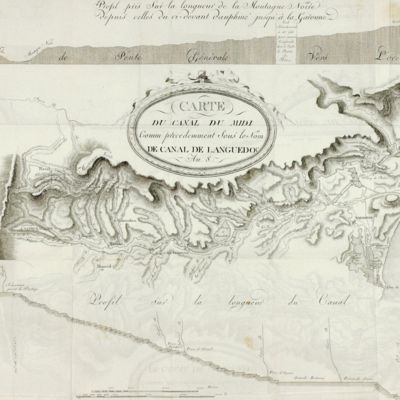