Two parts of a massive work, part of an enormous publication, comprising 63 volumes in all, edited by the British zoologists (principally ornithologists) Osbert Salvin and Frederick DuCane Godman, which is renowned for its thorough treatment with detailed descriptions and fine illustrations. All parts - published between 1879 and 1915 - are much sought-after and uncommon to rare. The mollusc part, written by the German malacologist Karl Eduard von Martens (1831-1904) is one of least-seen sections. Plates 1-28 show land snails and are all beautifully coloured by hand. Plates 29-44 show freshwater clams, and a few Melampidae and Littorinidae (!), as well as (on Plate 44) various additional land shells, which are always uncoloured. Many species are new. Von Martens included a history of malacology for each of the included states, from Mexico to Panama, although Mexico is usually regarded as part of North America. The contribution by Godman is the last part published. It contains a fine narrative of the origin of the series, Biologia Centrali-Americana (and of the famous ornithological journal, The Ibis, which is still published); on the friendship between the editors, and of the various collection trips made or paid for by the editors. Provenance: stamp of the American malacologist Richard Irwin Johnson (1925-2020) in the top margin of the front free endpapers and titles. Godman's work with a short cut in one text page, and a strong bump at the lower outer corner. Von Martens's contribution with the plates slightly toned, but otherwise fine. Kabat and Boss, Karl Eduard von Martens (1831-1904): His Life and Work, p. 91. Nissen ZBI, 2702. 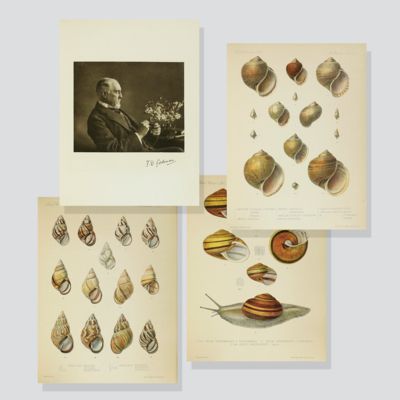