Paris, Imprimerie Nationale, 1870-1902. Two parts in three. Large 4to and matching folio (35.1 x 26.7 cm). Title pages to the zoology part, the volume, the text, and the atlas; 702; 731 [1-376, 377-731] pp.; 72 lithographed plates of which 46 finely and accurately hand-coloured. Uniform dark blue buckram with gilt title on the spines. All 17 original printed wrappers bound in. The wrappers list the year of publication, and the included plates and feuilles by number.

The first and rarest work to deal extensively with the rich continental molluscan fauna of Mexico and Guatemala. A complete copy - even including all original wrappers -such as this one is extremely rare. There are no auction records. In 1864, two years after the start of a military campaign in Mexico, Napoleon III ordered an additional scientific expedition, modelled after the famous scientific expedition initiated by Napoleon I, to Egypt, following the military campaign in that country. In contrast to the latter, the "Mexican expedition" produced only some haphazard results, mainly because the French lost interest after the end of the war. Nevertheless, a few superb monographs were among the published results. This includes this work on the terrestrial and fluviatile Mollusca by two of the foremost French malacologists, Paul Henri Fischer (1835-1893) and Joseph Charles Hippolyte Crosse (1826-1898), the "doyen of systematic conchologists in France during the second half of the nineteenth century" (Dance, " A history of shell collecting"). It took the authors more than twenty years to complete and neither of them lived to see the complete, published work. The larger and more colourful shells are finely hand-coloured; the plain plates mainly depict the anatomy. Several plates with very small or basically translucent shells (e.g. Subulina, Succinea) or finely sculptured (some Amnicola and Pachilusspecies) are wisely left uncoloured as well. Stamp of Lycée national de Tarbes on various leaves [on first half-title, title (with small label of the same), plate versos (not shining through) and outer margins (after plate 36, smaller stamp), explanatory leaves and many text pages. Several wrappers, which were made of cheaper paper, chipped at edges, and/or with some repairs. Two plates with marginal damp stains from before binding; a few spots, but generally quite clean and in all a good copy. Cat. BM(NH), p. 403 [erroneously as Crosse & Fischer], 605; Nissen ZBI, 1371, 4694; Sabin, 24425 [part]. 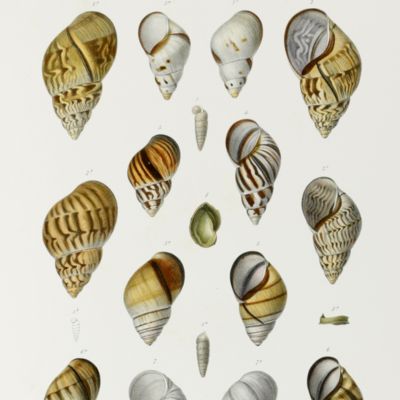