To list
« Previous Item Next Item »
Travels of an inquisitive mind

Travels on the continent, Sicily and the Lipari Islands. Second edition.

The author, Richard Duppa (1770-1831), was an English writer (of, for instance, The Life of Michel Angelo Buonarroti with his poetry and letters), archaeologist, botanist ( The classes and orders of the Linnaean System of Botany. Illustrated by select specimens of foreign and indigenous plants), and illustrator. This work is the illustrated narrative of his voyage through France, Switzerland, and -mostly- Italy. In the preface Duppa wrote "...the author has taken some pain to be correct in his facts and has never indulged his imagination". Indeed, his observations are detailed and correct. He even lists the travel hours and distances of each leg. Another notable feature is the author's interest in handwritings. Several plates show facsimiles of autographs and other writings. The work contains two indexes to the illustrations, namely one of the woodcuts and one of the engravings. The fine, very detailed engravings are not all on separate plates, but also present on text pages. For the appendix, Duppa lists five plates; however, there are six. There is no "first" edition of this title; this is a re-edited and very much expanded version of the author's Miscellaneous observations on the Continent (214 pp., 1825), which contained only the voyage through France and Switzerland. "Travels on the Continent" includes the Italian part - making up most of both the text and the illustrations. Plate numbering is odd: 1, 3, 4, 6, 7, 10, 12, 14, 15, 16, 17, 18, 19, 20, 21, I-VI. Uncut. Blindstamp in the top margin of the title page; a vague number stamp on the dedication page. Front hinge a bit weak; otherwise a very good copy. Rare. Not in Cat. BM(NH). 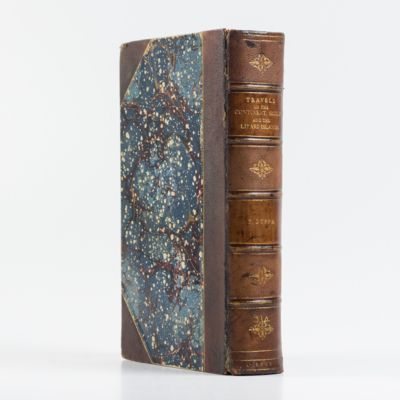 Travels on the continent, Sicily and the Lipari Islands. Second edition.