To list
« Previous Item Next Item »
Magnum opus of the botanist and geologist Henri Lecoq, with fine geological illustrations of the Massif Central with its many volcanoes

The most important geological work by the French botanist (mentioned by Charles Darwin in his preface to On the Origin of Species) and geologist Henri Lecoq (1802-1871). The fine illustrations of geological features and views in the Massif Central of Southern France, with its many volcanoes, are by Lecoq himself. Included are three facsimile letters of the geologists Dolomieu, Haüy, and De Saussure. Because there are several bis-plates, and many "plates" are grouped on single sheets, the true number of different plates is ten more than the 170 mentioned on the title pages, but the actual number of sheets is lower. Plate 142 was not published. Plates 92 and 151 appear in two different states of colour (not counted as extras). Signed dedication by Lecoq to "Monsieur Alluard/professeur à la faculté/hommage de l'auteur" on the half title of volume I. In the mid-19th century a Mr Alluaud was director of the Puy-de-Dome observatory. A few pages and plates with a circular water-stain (some, apparently, from before binding), a few pages lightly spotted, but in general a very good, clean set with all the published plates. Cat. BM(NH), p. 1076; Ward and Carozzi, 1350. 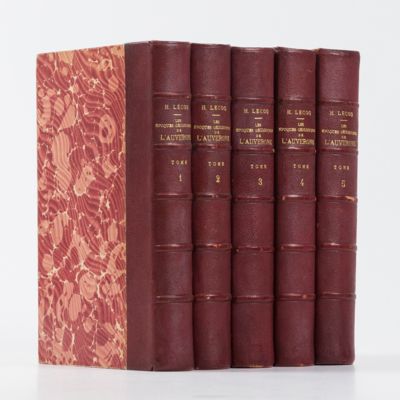