Paul Marcellin Berthier (1822-1912) is regarded as one of the foremost French photographers of the 19th century, as well as an accomplished impressionist painter. He is principally known as a landscape and a portrait photographer (of, e.g., the French poet Lamartine), and as a landscape painter. His landscape photos are rare and sought-after, and are, for instance, included in the collection of the Museum of Modern Art in New York. This photograph is of geological importance, showing Monte Frumento on Sicily, which is situated on the flanks of Mount Etna, whose snow-covered top is seen in the background. This photo can be dated as from 1863-1865, as Berthier is known to have photographed the Etna volcano during and after its 1861-1865 eruptions. He did not visit the area after 1865. The 1866 volume of "Le tour du Monde", contains a series of papers by Élisée Reclus on the 1865 Etna eruption, illustrated with engravings after original photos by Berthier. Berthier's blind stamp below the photo, as caption. Some spotting, mainly in the margins. 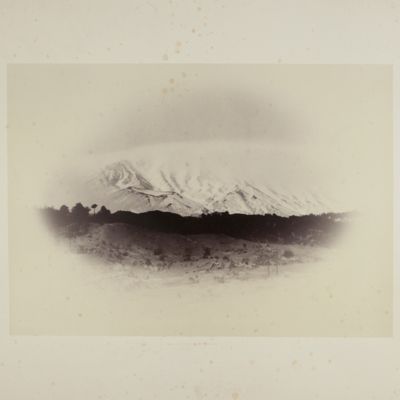